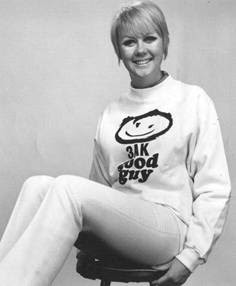 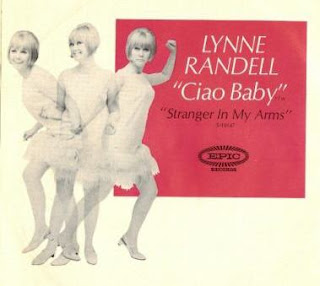 My intro the Lynne Randell in the 1980's did not come because I'd heard one of her songs on a cassette from a generous friend or knowledgeable mentor, it was because I saw a compilation LP on the Australian 60's reissue label Raven of her stuff with the most alluring sleeve. The album was called "Ciao Baby" and it featured a b&w photo on the cover of a rather tasty blond gal with a mod haircut and a youthful, sultry look. The music on it was passable, very few of the tracks grabbed me after cursory plays. Years later in the early part of the 1990's (when I began heavily immersing myself in soul music, especially danceable stuff) I rediscovered it and found myself entranced by a very soulful number of hers called "Stranger In My Arms". I began DJ-ing the tune from the LP and eventually came up with a few hundred dollars to score a mint U.S. pressing of it with a groovy picture sleeve (see above). It was issued in the U.K (as CBS 2847) and Australia (as CBS BA-221387) as well, but not with a cool piccy sleeve! Lynne, like many 60's Australian music stars, was actually born in the U.K. but raised downunder when her parents immigrated there. She had quite a prolific singing career there in '65-'67, doing mostly covers of other artist's (ie Lulu, Petula Clark, Little Anthony and the Imperials etc). 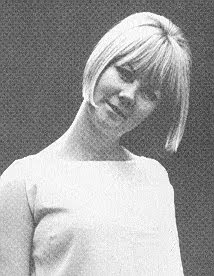 "Stranger In Your Arms" is an uptempo swinger, lushly orchestrated strings, precise horns and an angel's chorus of female backing harmonies that sweep in with the intro. Lynne's vocals are strong. The music is what makes the number "soulful", much like Len Barry's "1-2-3", where the lead vocalist does not necessarily sound soul inspired, but the backing beat does. "Ciao Baby" is a fairly weak number in comparison, having previously been recorded in the U.K. by The Montanas as a flip side of "Anyone there (U.K. Pye 17282). It's got this wonky Tom Jonesy feel (in a bad way, not "Dr. Love" etc) ie. typical schlocky pap peddled by publishers for folks who don't write their own material to fill up B-side space with etc. Nuff said. Both numbers were recorded, it's reputed in New York City while Lynne was in the United States as a guest on a Monkees tour of all things (where publication of a photo of Davey Jones and Lynne sparked teen magazine speculation of "romantic involvement" AND one Jimi Hendrix was making his American debut before being forced from the tour). Footage of her cavorting around NYC was filmed for a "Ciao Baby" promo film and can be viewed below.

Lynne sadly passed away in 2007 from complications relating to a life of struggling off an on with an amphetamine addiction, a habit which began in the 60's when her manager commented that she was adding a few pounds and gave her the "perfect solution to stay thin". In her obituary in the Australian press her son was quoted as attributing her death to "the end result of a long term substance abuse problem". To my knowledge I'm not certain whether either track has been reissued on CD.

"Stranger In Your Arms":