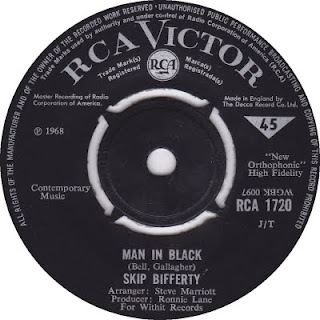 Skip Bifferty are a very typical late 60's U.K. psych/freakbeat band in that they made a hideously rare LP (unititled RCA 7941 in July 1967) and three amazing singles.

Skip Bifferty were from the Newcastle area and were comprised of Graham Bell (vocals), John Turnbull (guitar), Colin Gibson(bass), future Ian Dury and The Blockheads member Micky Gallagher (keyboards) and Tommy Jackman (drums). They had previously cut two 45's on RCA ("On Love"/"Cover Girl" RCA 1621 August 1967 and "Happyland"/"Reason To Live" RCA 1648 November 1968). They were managed my the infamous Don Arden, best or worst known for his unscrupulous dealings with the Small Faces. The third and final single as Skip Bifferty has Steve Marriott credited as an "arranger" and Ronnie Lane as a "producer" but it seems this was erroneous as most Small Faces scholars seem to deny that this ever occurred. One would expect that at the time of this single's releases (July 1968) The Small Faces had long ended their association with Arden and would probably not be involved in a session with one of his artists.

"Man In Black" is a legendary record, from Gallagher's melodic piano pounding, Gibson's swooping bass and the overall feel of the song it's one of the best of it's genre. Lyrically it seems to be able a mysterious man in black, is he the horned one or someone evil to beware of (perhaps a thinly veiled number about Arden, more on that in a bit). Interestingly though it's an upbeat happy tune not at all in line with the lyrics! On the flip "Money Man" was also the lead off track on the band's sole untitled LP. It's a pop psych track with a very "music hall" feel from it's melodic almost nursery rhyme chorus and high falsetto snippets where the band sing "half pound", "half shilling" etc beforehand. It's also got a driving riff after all this that gives it a "freakbeat" edge. The record sadly went nowhere and soon the band were forced to change their name to Griffin to escape the evil one's clutches (that'd be Arden, not Satan, though some might be inclined...) . 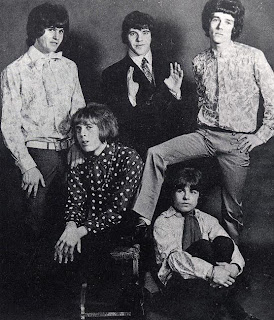 Both sides have seen reissue on a variety of places, though the best place to get them both is on the essential two CD Skip Bifferty CD "The Story Of.." which complies all their A- and B-sides, the LP tracks, BBC sessions and cuts recorded as Griffin and as another of their alter ego's Heavy Jelly.