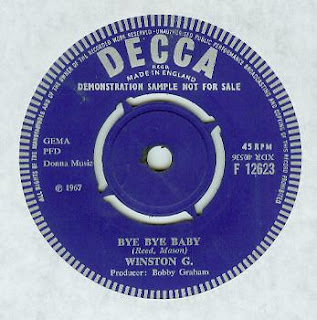 
One ponders why, when they were compiling all their "Scene" CD's (ie "The Mod Scene", "The R&B Scene" et al) Decca overlooked this two sided monster by one Winston G. I couldn't tell you who Winston G. was, I've seen photos of Winston G. and The Wicked and have read of one "Winston Gork" and that the pre-Eric Clapton Yardbirds lead guitarist Top Topham was briefly part of the line up, but haven't much to tell other than the fact that there were several Winston G. records on various U.K. labels in the 60's. There were two singles on Parlophone then two more on Decca, this was the third and final one.
"Riding With The Milkman" is a bit twee. The intro has this slightly phlanged keyboard part that reminds me of what psychedelia would've sounded like if Joe Meek hadn't eaten a 12 gauge and had been around to participate in it. It's not a bad tune really, just a bit limp, but it does feature an infectious catchy chorus that's rather sing-along like. On the flip we have a raver. "Bye Bye Baby" is one of those British 60's records that owes so much to blue eyed soul belter Steve Marriott and his Small Faces (sse The Mojo's "Till My Baby Comes Home" etc). Starting of with a solitary distorted guitar chord and a throaty Marriott worthy style shout "bye bye...girl", it rocks. The number chugs along with an almost "I'm A Man"/"Jean Genie" style lick that descends into a perfectly distorted freakbeat guitar solo. It doesn't get much more "mod" than this in '67 England kids, not everyone was "tripping the light fantastic"!! Both sides were produced by the late Bobby Graham, the famed U.K. 60's session drummer.
"Riding With The Milkman" recently surfaced on the U.K. 60's psych/pop CD compilation "Fairytales Can Come True Volume Three: Let's Ride" while "Bye Bye Baby" has cropped up on Psychic Circle's Cd comp "With The Sun In My Eyes".
Hear "Riding With The Milkman":
http://youtu.be/Phni__eDOhc
Hear "Bye Bye Baby":
http://youtu.be/UL9d_-C-zSQ
By Wilthomer - September 25, 2009