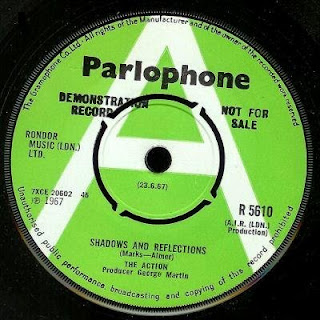 THE ACTION-Shadows And Reflections/Something Has Hit Me U.K. Parlophone R5610 1967

There aren't many U.K. 60's bands that can get me babbling as much as The Action. Long held in high esteem amongst 60's consigenti their singles are getting harder and harder to find. In fact I saw their 1980 Edsel records compilation "The Ultimate Action" go for $200 on E-Bay last year! Lucky for you folks who aren't insane enough to buy their 45's or any other pricey vinyl there's always a still in print CD compilation "Action Packed" featuring all of their 5 60's singles and a host of unreleased cuts.

I won't bother to try to give you their whole history but let's just state that by 1967 the band had released 5 singles as The Action, all on Parlophone and all produced by George Martin. Despite being a hot live band who were tirelessly gigging they had not notched up any hits. Their repertoire was largely built around U.S. soul/r&b covers (some well known, some quite obscure) with a sprinkling of group originals. By 1967 their image as soul aficionados had changed with a distinct appreciation for "American West Coast sounds" which would produce both group originals in this vein and covers like The Association's(more on them in a bit) "Pandora's Golden Heebie Jeebies" and "Along Comes Mary" and The Byrd's "I See You" and "Why" in their live set (versions of both "I See You" and "Pandoras.." along with John Coltrane's "India"were recorded for BBC sessions, unfortunately only versions of "India and "I See You" exist). By this point the band had long seen the departure of guitarist Pete Watson(who left in December of 1966) . They continued as a four piece with Reg King (vocals), Alan "Bam" King (lead guitar/vocals), Mike Evans (bass/vocals) and Roger Powell (drums). 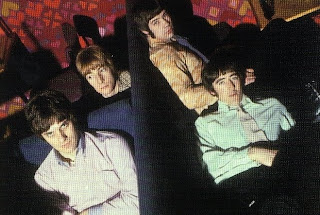 As large fans of The Association (easily indicated by giving a listen to their previous single which comprised of two band originals: "Never Ever"/"Twenty Fourth Hour U.K. Parlophone R5572 2/67) it should've been no surprise that their next single should be somehow connected to them. "Shadows And Reflections" was penned by Tandyn Almer (responsible for The Association's hit "Along Comes Mary") and Larry Marks. The track was previously released in the U.S. by The Lownly Crowde (MGM K 13740) and later by Eddie Hodges as "Shadows And Reflexions" (Sunburst 773 November 1967) and The Byzantine Empire (U.S. Amy A-11,046 November 1968).  You can hop on over to my pal Larry Grogan's blog to hear and read all about the latter.

The Action's version is much fuller. Led of by some baroque harpsichord (more than likely played by George Martin who added piano to other tracks by the band) and propelled by Reggie King's soulful voice it's nothing short of a masterpiece. The number really gains it's strength when Alan King and Roger Evans add their backing vocals then comes a horn section solo that adds a distinctly "Swinging London" feel. Classic! On the flipside we have my favorite Action tune of all time: "Something Has Hit Me", penned by Reggie King and his friend Peter Jones. Starting with an A capella intro and some perfectly blended harmonies it's more than obvious that The Association were the inspiration behind this track. King's vocals are as soulful as ever and the precision of the backing vocals are second to known. As with the A-side subsequent CD reissues tend to mix the music "down" and the vocals "up" on this number, and being a true anorak I'm here to swear that the original 45 has a tasty piano riff at the break that really adds moody atmosphere to the track that isn't as forceful on CD. Regardless it's hard to dent the sheer power of this number that's musically sparse (just acoustic guitar, bass and drums with the added piano bit) making the vocals the driving force on this track. They don't make them like this anymore, and sadly The Action didn't either as sadly this was their final single. 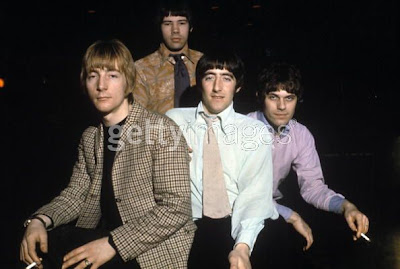 Both tracks are available on the more recent Action CD compilation "Action Packed" or the older Action CD collection "The Ultimate Action" (utilizing the same tracks but with less cool pics and no label scans in the sleeve notes). Both also cropped up (in far superior audio quality) on the now strangely expensive 80's Edsel LP compilation "The Ultimate Action" (with small sleeve notes by Paul Weller), which made an entire generation of mods, like me, dedicated Action disciples.

"Something Has Hit Me":