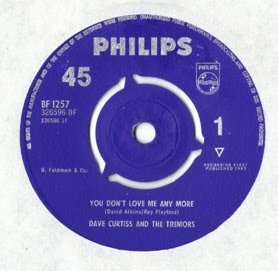 DAVE CURTISS AND THE TREMORS-You Don't Love Me Anymore/This Sweet Girl Of Mine U.K. Phillips BF 1257 1963

Things don't get much more obscure than this beat fans! Here's an off the wall 60's British beat 45 from a truly unknown group from Clacton, Essex (I believe) who had a few other U.K. 60's 45's and a U.S. only release of the fuzzed out version of "Que Sera Sera" on the tiny Karate label in '64!

The A-side "You Don't Love Me Anymore" is a killer. Yeah it's got that hiccuppy style vocal where every guy in 1963 England was trying to sing like an American or some hillbilly from Lubbock, TX, yeah it's got a volume pedal effects guitar solo that would've done Joe Meek proud but best of all it's got these hysterical, rapid fire delivered lyrics about a guy who's girl keeps trying to do him in "as I lay there thinking in my hospital bed, after you came to see me just for old times you'd said , the doctor drank my milk and then he fell to the floor which confirms my suspicions maybe baby you don't love me anymore..". The B-side, "This Sweet Girl Of Mine", is passable but tepid beat group stuff, not rocking enough to be beat, too upbeat to be a ballad, strictly yawnsville!

Dave Curtiss did get a brief glimpse of the limelight when was touted as either the bassist or lead singer (depending on who you hear it from!) in a pre-Deep Purple concept called Roundabout, but had to return to France for a gigging commitment playing in Michel Polnareff's backing band giving Nicky Simper (ex-Johnny Kidd & The Pirates) a shot on bass!

Neither cut has turned up on any legit compilations to my knowledge, which, in the case of the topside, is criminal. Luckily I found it on YouTube for you all to give a listen!

"You Don't Love Me Anymore":