It took me quite a long time to get my head around The Spencer Davis Group MK.II.  I call them "MK.II" as original line up member Stevie Windwood packed up and started Traffic and his brother Muff moved into A&R with Island records.  Their replacements were former A Wild Uncertainty organist Eddie Hardin and one time Fleur De Ly's guitarist Phil Sawyer. I'd always found them a bit musically schizophrenic, one minute they'd be r&b the next they were dabbling in kaftan and beads psychedelia.  I'm still not sure which of these genres I prefer by them but I like them both, just quite distinctly played separate of each other!!

Today's 45 in question firmly divides both camp.  It was their 2nd U.S. 45 as the new and improved S.D.G. (the first was "Time Seller" b/w "Don't Want You No More" United Artists UA 50202 August 1967). Side A is a cover of Johnny "Guitar" Watson's "Looking Back" (oddly credited to band members Davis and Sawyer!) with the quirky pop-sike of "After Tea" on the flip. It was not issued in the U.K. in this form, "Looking Back" was issued on an promo only one sided 45 shared with Traffic who did "Here We Go Round The Mulberry Bush" to promote the film of the same name and with snippets of introductions by D.J. Tony Blackburn back in the U.K. (United Artists  PSRS 314 1968). It was however the A-side in a few European countries.   "After Tea" was a British A-side (United Artists UP 2213 April 1968). The U.S. issue with "Looking Back" on the topside was issued in April 1968 but failed to chart. 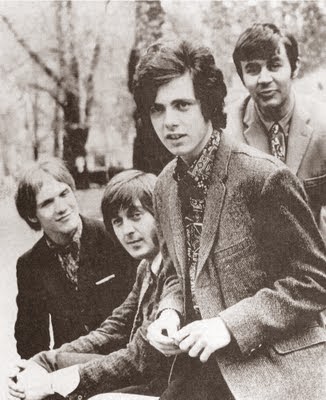 "Looking Back" is driven by Eddie Hardin's swirling Hammond B-3 and Pete York's cowbell.  I'm not too swell on the lead vocals but the organ is so groovy it negates any reservations I may have about them!! There was, as I recall, lots of interest in this one in the late 90's at DJ nights with quite a few of my friends spinning it, I was always a bigger fan of the flip.
"After Tea" is a full on 60's pop-sike number that first came to my attention via Bam Caruso's Rubble Vol. 2 (appropriately named) "Pop Sike Dreams".  The lyrics are ludicrously twee: "I'll take you to a place with mountains edged with lace, a place where we will find jelly beans and wine...", but the backing is incredible.  It's a delightful cacophony of piano, sitars (Dave Mason I presume), flutes and a Kinks-like sing along chorus.
Both sides were collected on a very comprehensive SDG Mk. II collection  called "Taking Time Out: Complete Recordings 1967-1969".