Here's a little known one that doesn't get a lot of mention, a none too common 1965 single by U.K. 60's jazz trombonist Chris Barber featuring fellow jazz legend Ronnie Scott on saxophone and Hammond player extraordinaire Brian Auger!

"Morning Train" is a swinging instrumental that would sound like some incidental B.B.C. Light Programme music is it wasn't for Auger's funky organ, a wonderful sax solo by Ronnie Scott and of course a solo by Chris Barber with an amazingly funky Mar-Keys style groove beneath it all. I am curious to know who the rest of the musicians were so if anyone knows pop us a line. It owes quite a bit to "Wade In The Water" melody wise (which isn't a bad thing). 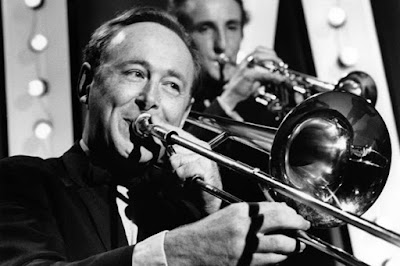 "Finishing Straight" is more of a swing/jump style jazz number (minus involvement from Auger or Scott) that's not remotely interesting and was featured in a racing film called "Brands Hatch Beat".

"Morning Train" was comped on Psychic Circle's "On The Brink: Return Of the Instro Hipsters" CD.

Barber of course was no stranger to British r&b, dig this footage of him jamming with Gary Farr & The T-Bones in 1966 (incidentally he made an incredible gospel/soul 45 with Chris Washington The T-Bones "If I Had A Ticket" UK CBS 202394 in 1966 as well) :