In 1964 ska was the "in" thing in Britain. The Beatles ("I Call Your Name") and The Hollies "("A Taste Of Honey") both employed ska rhythms on a track each, the horrendous Migil Five were issuing records with a ska beat, Mickey Finn and the Blue Men cut a ska version of Bo Diddley's "Pills" , Georgie Fame and the Blue Flames had been employing ska for awhile and cut an E.P. of ska tracks called "Blue Beat". Ahead of them all was Fame's fellow London r&b specialist Chris Farlowe who, on the sly (he was signed to Columbia at the time) cut a single on Decca as "The Beazers" to join the ska craze in January 1964 (this would not be the last time Farlowe cut a 45 on the sly as you can read here).

"The Blue Beat" starts with a strong horn section playing a ska rhythm (sounding impeccably "big band", no surprise as it was produced by top arranger/band leader Cyril Stapleton who co wrote it as well and it's his band doing the instrumental backing here) and Farlowe utilizing his r&b belter tones with no fake West Indian patois necessary here.

"I Wanna Shout" is nothing remotely connected to ska.  It's an awful early 60's American style pop number that straddles doo wop that is dreadfully reminiscent of The Diamonds/Maurice Williams abomination "Little Darlin'". 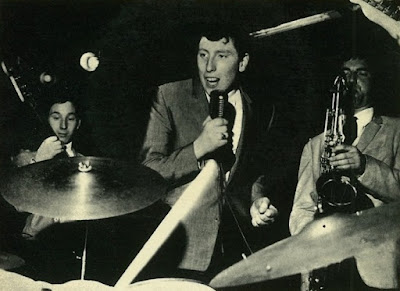 Both sides were collected on RPM's excellent Chris Farlowe and the Thunderbirds compilation "Dig The Buzz: First Recordings '62-'65". "The Blue Beat" was also featured on Deram/Decca's compilation "The R&B Scene".

It's a record that I like. I've got in on Kent's Rhythm & Blue Eyed Soul (Kent 086), culled from the Decca label and its subsidiaries which is worth searching out, side two being especially modish what with The Quik, John Mayall, The Hipster Image and another Farlowe cut, Air Travel