The "American singer/songwriter" craze hit Britain in' 66-'67 when suddenly A&R men were foisting tunes by American songwriters (especially those on the West Coast) on their artists. This was of course nothing new but it did not seem to occur on such a large scale until the "American Invasion" in '66-'67 that saw U.S. rock n' roll groups touring Britain or more importantly, British labels issuing singles by American groups who were clearly jarred from their "Paul & Paula/ Santo & Johnny/surf music" comas by The "British Invasion" . One of those songwriters who had a massive impact  in the U.K. was Randy Newman. Alan Price had scored a massive U.K. hit with his "Simon Smith And His Amazing Dancing Bear" in February '67 (with another Newman composition "Tickle Me" on the flip side) , Julie Driscoll cut "If You Should Ever Leave Me" in April and Eric Burdon and the Animals had cut a version of "Mama Told Me Not To Come" (unreleased in the U.K. it would crop up on Eric's first post Animals U.S. LP "Eric Is Here" MGM E-4433 1967). Recording his stuff seemed like a sure fire hit.

Despite a steady career with Decca the Nashville Teens had not had a hit since April '65's "This Little Bird" which stalled at #38. In September 1967 they released their 9th single  for the label (and incidentally their next to last as well).  That single would be a Randy Newman composition "The Biggest Night Of Her Life". Eschewing the gritty mod/r&b/freakbeat of their previous four releases this track is a full on pop song with no expense spared with brass and strings behind the driving ivory tinkling and interesting stops (complete with backwards cymbals).  It's not a bad track it's just hard to imagine that it's the Nashville Teens performing it with all the bells and whistles that were thrown in (c/o one Vic Smith later to rechristen himself Vic-Coppersmith-Heaven when he produced the Jam the following decade). 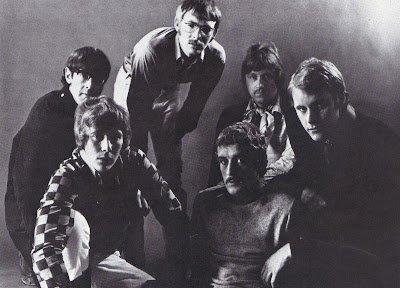 If that wasn't a taste of something different the B-side, "Last Minute" (penned by lead singer Art Sharp),  is even further from what you'd expect. With it's disembodied/distant backing vocals, phlanged piano and an overall ominous feel to it all that seems to hint at a surreal and detached view of the mundane 9-5 world . It's no small wonder that it was finally unearthed to be used on a CD comp to re-launch the "Rubble" series "new Rubble Volume Six: Painting The Time"  in 2005.

Both sides were recently compiled on a dodgy looking CD called "Rockin' Back To Tobacco Road" (which has four studio cuts labelled "Recorded in Hungary", bootlegged in Hungary is more like it!) while "The Biggest Night Of Her Life" appeared on a CD called "Tobacco Road".

Hear "The Biggest Night Of Her Life":