1. THE BEE GEES-"Harry Braff"
My interest in 60's Bee Gees began by seeing a "Beat Club" clip of this on cable TV in 1984. Miraculously I found it on a Euro pressing of their 2nd British/US album "Horizontal" the very next day. "Harry Braff" is a bouncy/catchy little number cheering on a race car driver (fictional one would presume) and still stands as one of the best by the Brothers Gibb.

2. THE GAYLADS-"Africa"
This hot 1967 single cut on the famous Studio 1 label takes a ska rhythm and the vocals of a spiritual and creates one of the coolest B-sides ever heard on the genre (on the flip of The Soul Brother's "Hot Rod").

3. BOBBY JAMES-"Going Back To Philly"
This rocking, obscure little groover surprisingly comes from 1967.  Which totally surprises me as it sounds like something recorded much earlier.  Delivered in a frantic pace with barrel house piano and edgy guitar it's like a stripped down Fats Domino on a bad bender of booze and bennies.


4. THE HOLLIES-"Too Many People"
The Hollies took this strong, group composed protest number from their 1966 untitled LP and ran with it.  It wasn't released in the U.K. but saw a release in four countries on the Continent. Powerful stuff backed by the band's incredible playing and top notch musical backing.

5.  THE SOUL CLAN-"Soul Meeting"
Solomon Burke, Arthur Conley, Don Covay, Ben E. King and Joe Tex convene in 1968 (presumably at Muscle Shoals) to cut a one off two sider.  This gets overlooked too often which is a shame as it's a great track. Perhaps the song itself wouldn't stand on its one by one of these artists solo but with the 5 of these who could go wrong?

7. DEXY'S MIDNIGHT RUNNERS-"The Teams That Meet In Caffs"
Wow. 35 years later and the sheer brass power of this track still makes the hairs on the back of my neck stand up and the churchy Hammond swirling beneath it all just seals the deal.  Quite possibly the best instrumental ever recorded in the 80's. Amazing. 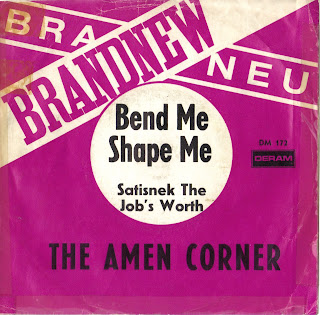 8. AMEN CORNER-"Bend Me Shape Me"
Here's another Hammond n' horns killer. Amen Corner kick the crap out of The American Breed's "Bend Me Shape Me" with 100% octane soul powered almost entirely by their ballsy brass section with faint touches of B-3 that really builds.

9. HOUSE OF LORDS-"In The Land Of Dreams"
I honestly never paid attention to this number for the oh, three decades I've had it on a "Rubble" comp ("Rubble 15: 5,000 Seconds Over Toyland" to be exact). I recently came across it and I will say I was quite surprised by it's inoffensive psych pop by this one off Glasgow band, released in 1969 on on small B&C label.

10. BOBBY JAMESON-" Viet Nam"
I discovered this track through the excellent Jon Savage book "1966". Released in 1966 this incredible cacophony sounds insane. Starting with spooky organ then cutting into a raunchy lo-fi Bo Diddley groove which tells the semi autobiographical tale of a draft notice to go serve in Vietnam it's almost got too much going on at once to be able to comprehend .