The late Roy Budd is best known for his soundtrack work on films and television shows especially that of the gritty 1971 movie "Get Carter" but before fame and film score work he had to start somewhere......

His debut came in March 1965 with a jazzy little instrumental piece written by Budd and famous U.K. jazz bandleader Harry South titled "The Birth Of Budd".  Lead by Budd's boozy bar room piano it builds adding guitar, subtle organ, horns and is jazzy yet has a distinct poppy swing to it that reminds me of The Zombies "Conversation Off Floral Street" from many years later.  There's a nifty little bluesy guitar towards the end as it all slowly fades away that makes it easily mistaken as a mid 60's U.K. r&b 45. 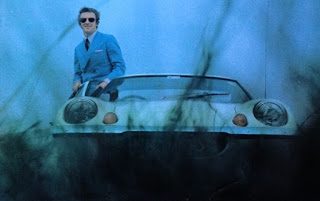 "M'Ghee M'Ghee" is a speedy jazzy piece that owes a great deal to "Moanin'" melody wise )give or take a bit). It starts out a bit repetitive and almost a tad too trad jazz (reminding me a bit of the pre-Mike Cotton Sound outfit Mike Cotton's Jazzmen) but eventually picks up steam and is not at all unplayable, just pale in comparison to the strong top side.

"The Birth Of Budd" was reissued on a 1997 Castle/Sequel Roy Budd compilation  titled "The Rebirth Of Budd" (which I'm sure is probably long out of print) and the flip side has yet to surface anywhere.