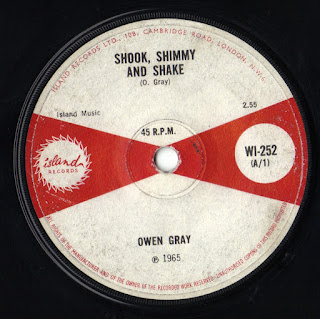 1. OWEN GREY-"Shook Shimmy Shake" WI-252 1965
Owen Grey cut several interesting ska 45's on Island. This one bridged a link between soul and ska (a wining combination in my book) and is easily his most in demand on the label.  This hybrid was none is better illustrated by this soulful release from 1965 that combines the jazzy/r&b horns of ska with Grey's powerful voice that's like a cross between Jackie Wilson and Clyde McPhatter.

2. THE CIRCLES-"Take Your Time" WI-279 1966
One of the rarest British artist releases on Island is this one off 45 recorded by members of Screaming Lord Sutch's group The Savages under the name The Circles. This Bobby Bland composition was originally cut as an obscure US r&b/soul 45 by Little Mr. Lee and the Cherokees (Sure Shot 5006). The Circle's version is a mid tempo slow boiler that isn't initially impressive on a first listen but grows on you.

3. DERRICK HARRIOTT-"Tang Tang Festival Song" WI-3153 1968
Steeped in a deep funky bass/keyboards/conga groove is this incredible rocksteady number that has repeatedly eluded this writer on a regular basis.  For me the strength in this number has always been the smooth horns that slid in almost unnoticed at first beneath the chunky rhythm. It's a very infectious earworm that's not easily forgotten. 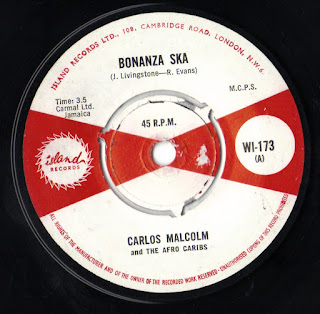 4. CARLOS MALCOLM & THE AFRO CARIBS-"Bonanza Ska" WI-173 1965
The origin of many 60's ska instrumentals are a constant source of amusement for me.  More times then often it would be a movie theme (see #7 below) and a TV theme as well. Taking the theme from the 60's TV Western "Bonanza" and throwing a ska rhythm behind it has to be one of the more ingenious ones I've heard offered here by Carlos Malcolm, one of many "entertainers" who primarily played calypso music who quickly switched to ska when it appeared it might eclipse samba and bossa nova as the "next big thing".

5.  WYNDER K. FROG-"Turn On Your Lovelight" WI-280 1966
Wynder K Frog's Island debut was this storming, jazzy instrumental version of Bobby Bland's "Turn On Your Lovelight".  Masked in some solid horns the number of course brings organist Mick Weaver's Hammond virtuoso ability to the fore and like most of the first few Wynder K Frog 45's is decidedly more jazz than r&b.

6. JACKIE EDWARDS-"I Feel So Bad" WI-3006 1966
The rarest of all Island 45's in the WI series is this mid tempo number.  Thanks to it's near legendary status on the Northern Soul scene it's damned near impossible to come across with copies running hald a grand when they do surface. Wrapped in Syd Dale's melodic strings and some subtle horns Edwards belts his way through this slow burner with gusto. Highly recommended. 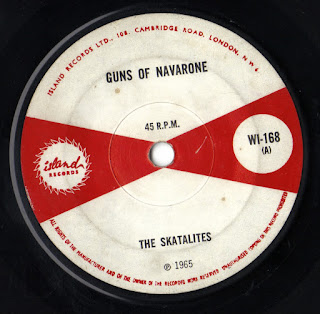 7. THE SKATALITES-"Guns Of Navarone" WI-168 1965
Certainly the most well known ska 45 on Island and certainly their best selling was this March 1965 interpretation of the theme to the World War Two cinema epic "Guns Of Navarone". Built on a powerful horn section (including the legendary Roland Alphonso on saxophone and Don Drummond on trombone) It's easily the most famous ska instrumental of all time.

8. THE V.I.P.'s-"I Wanna Be Free" WI-3003 1966
Soul/r&b legends The V.I.P.'s debut with Island was this October 1966 Joe Tex cover produced by Island supremo Chris Blackwell.  I actually enjoy it more than the original because they slow it down and give it a more down trodden feel thanks to the belting vocals of Mike Harrison and a gritty guitar solo by Jim Henshaw and aided in no small part by the rest of the band on backing vocals. 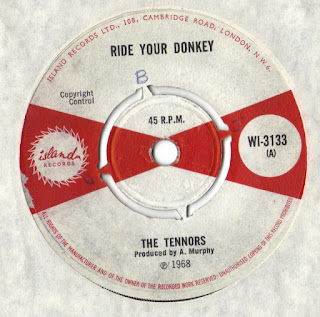 9. THE TENNORS-"Ride Your Donkey" WI-3133 1968
Also known as The Tenners, The Tennors cut a variety of 45's for a host of labels in the U.K. using both monikers. This release first saw a U.K. issue twice on the Fab label (each time with a different flip side as Fab 41) before it came out on Island.  It's a perfect mid tempo rocksteady groover and one of the last few of the label's WI series.

10. THE FREAKS OF NATURE-"People! Let's Freak Out" WI-3017 1966
In 1966 the late degenerate Kim Fowley took The Belfast Gypsies (former members of the now Van Morrison-less Them) and cut this insane little r&b number that was relesased in the U.K. on the tail end of '66. With it's Bo Diddley rhythm and licks and a pounding/frantic r&b feel it's not too far removed from anything Them ever cut. Regardless it's a glorious rave up!

Some great tunes here - thanks for introducing a few that were new to me. My own favourite WI is WI 224, 'The National Dance' by Derrick And Patsy. Irresistible.