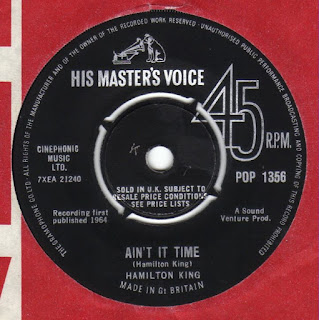 1. HAMILTON KING-"Ain't It Time" HMV POP 1356 1964
This self penned number by Hamilton King starts with some Animals styled combo organ and mandatory harp blowing. The vocalist (presumably Hamilton King) sings with almost utter detachment. The most interesting part of the tune is the steady, groovy Farfisa or Vox Continental behind your run of the mill '64 Rolling Stonesy r&B (come to think of it this track reminds me of "Off The Hook").

2. STU BROWN & BLUESOLOGY-"Since I Found You Baby" Polydor 56195 1967
Bluesology's page in rock n roll history stems from their keyboardist Reggie Dwight who went on to own a minor football team and write a tribute to Lady Princess Di. Their final single added lead singer Stu Brown's name to the moniker and pumped up their sound with some really tough horns (I always thought the horns were Bluesology's strong suit) and slightly overblown vocals by Brown. It was their last and the band imploded shortly afterwards. 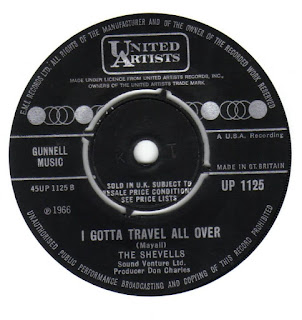 3. THE SHEVELLS-"I Gotta Travel All Over" United Artists  UP 1125 1966
This mid tempo little groover was penned by John Mayall (and like "Something" which was given to Georgie Fame, was never recorded by the author himself). It jogs along at an "Everybody Needs Somebody To Love" style pace and far outshines it's A-side , a cover of Jackie Edwards "Come On Home" . The band then switched to Pye where they backed Mike Stevens on a killer version of Jackie Paine's "Go Go Train".

4. THE MEDDYEVILS-"It's All For You" Pye 7N 17091 1966
The strangely named meddyEvils (spelled exactly like this on their record's labels) put out just two singles in their short spell on the Pye label, both are excellent. "It's All For You" is a brilliant r&b dirge in 4/4 time with some strong sax, swirling/churchy Hammond, barrel-house piano and impassioned lead vocals. The best part is the end where it almost sounds like the sax and organ are competing to finish the track.

5.  THE ST. LOUIS UNION-"Think About Me" Decca F 12508 1966
One of the greatest double sided British r&b couplings was this final 45, a cover of Bob Seeger's gritty "East Side Story" backed with this stormer by Manchester's finest r&b purveyors The St. Louis Union. Starting with some soulful piano and hand claps it's an incredible groove with it's busy, descending bass line and slashing guitars behind Tony Cassidy's lead vocals.  There's a great sax solo that duels with some Nicky Hopkins style ivory tinkling and zooming bass that completes this killer tune. 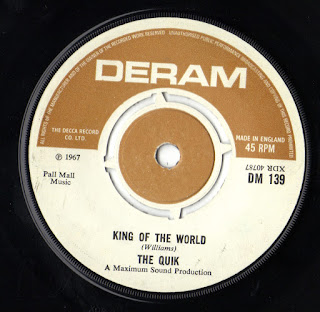 6. THE QUIK-"King Of The World" Deram DM 139 1967
The Quik cut just three 45's on Deram, all in 1967 and all of which are solid examples of mid 60's British mod/r&b heavy on the "Hammond n' horns" formula. "King Of The World" was their second single released in July of 1967 (and saddled with a lackluster attempt at "My Girl" on the flip) and follows the "party" template set by it's predecessor's B-side "Bert's Apple Crumble" with wailing Hammond, smooth sax, hand claps and a raucous feel to it.

7. KENNETH WASHINGTON with CHRIS BARBER & THE T-BONES-"If I Had A Ticket" CBS 202394 1966
This mondo obscure coupling by a singer named Kenneth Washington with legendary trombonist Chris Barber and Gary Farr's backing group The T-Bones is a rare instance of what I would call British "gospel r&b". There's a funky soulful horn refrain, an "I'm A Man" style organ groove and some spiritual style call and response backing vocals. Surprising it all works. I'd love to know more about this band and record.  Anyone?

8. HAMILTON & THE MOVEMENT-"I'm Not The Marrying Kind" CBS 202573 1967
Written and produced by Bill Wyman (co-authored with Moon's Train lead singer Peter Gosling), I've often wondered if this was sort of a not-so-secret message from Bill to his Missus, have a listen to the lyrics and prove me wrong since Billy was a self confessed shag monster (god knows how or why he was by far the fugliest Stone!). Regardless it's a full on, brassy, powerful affair and is a perfect example of mid 60's soul British r&b (dig the incredible horn section in the middle). Again I have to get up on my soapbox and ask if Wyman could produce amazing records like this why did the Stones mid 60's UK recordings sound like shit from a production stand point?

9. JACK BRUCE-"Rootin' Tootin'" Polydor BM 56036 1965
Probably the rarest British r&b 45 is this single, the solo debut by Jack Bruce cut in between his leaving the Graham Bond Organization and his brief his tenure with Manfred Mann.  This was the flip of "I'm Gettin' Tired (Of Drinkin' And Gamblin')" and musically it sounds exactly like what you would expect from the GBO and for years I thought it was them!  The line up was actually: Bruce (lead vocals, bass, harmonica), Don Rendell (saxophones), Mike Falana (trumpet) and John Stevens (drums). A perfect specimen of jazzy, suave British mid 60's r&b. 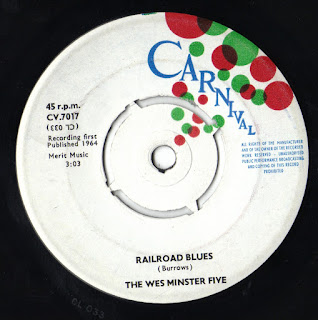 10. THE WES MINSTER FIVE-"Railoroad Blues" Carnival  CV 7017 1964
The Wes Minster Five cut four singles for the obscure Carnival label (primary a ska imprint based in the U.K.), three on their own and their debut backing female vocalist Maynell Wilson.  This is my favorite of the lot, an uptempo jazzy organ/horns instrumental not unlike the two 45's Georgie Fame cut on the R&B label (another British label with a primarily ska output but with the odd British r&b release).

Ray Davies was a member of Hamilton King's band from February-June of '63. They had both been in the Dave Hunt R&B Band along with noted saxophonist Lol Coxhill. Small world!