Scott Walker. You either love him or hate him.  If I hated him I would not devote time to anything he did so.....

Today's specimen is an unusual Japanese only 45 that takes two tracks from his 4th solo LP "Scott 4" (the last Scott LP to bear numerals in the title). Both Scott and The Walker Brothers were huge in Japan so it's no surprise that such an oddball 45 was issued there as the Japanese released a host of interesting Walkers items.  And speaking of Japanese Walker Brothers items you can check out a gallery of Japanese Walker Brothers and related 7 inches here and a bit on Gary Walker's Japanese only album here. The Japanese had previously issued a 45 of two cuts from his previous album "Scott 3" : "If You Go Away" b/w "Two Ragged Soldiers" (Phillips  SFL-1216) which was like today's subject, not issued in this coupling anywhere else.

"The Seventh Seal" named after the famous Ingmar Bergman film is basically a musical synopsis of the film. That might sound incredibly lame to anyone who has never heard this tune but it's the musical backing that gives it it's edge from the Spaghetti Western horns and Flamenco acoustic guitars intro to sweeping, mournful strings and ends with it's Gregorian chant backing vocals while Walker paints a bleak visual picture with his incredible lyrics and in his full on overwrought delivery. "This morning I played chess with death said the knight, we played that he might grant me time...". 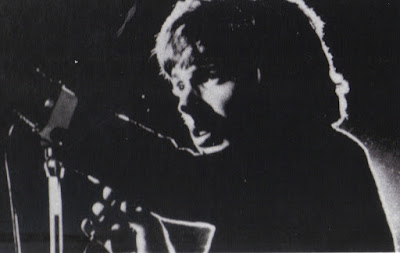 "The Old Man's Back Again (Dedicated To The Neo-Stalinist Regime)" is my favorite Scott Walker track of all time. Awash in Soviet Army men's chorus style backing vocals, bittersweet strings and the funkiest bass line ever on a Scott Walker record  the man from Ohio croons with fluidity with lyrics that paint a bleak picture of life in the gray, drab, cold Soviet Union.  It takes it's verses from different points of view in the Soviet experience: a woman cringing as "they" take her husband away, the breadlines "where they queue all day like dragons of disgust" with the suspicious old women watching while waiting for food to finally a lone sentry standing guard in the rain who's mother called him "Ivan" with Walker singing "he'd like another name, the one he's got's a curse".  It ends with Walker scat jazz improvising over the echo drenched Georgian chant/Soviet Army men's chorus.

As mentioned above both cuts are contained on his highly recommended album "Scott 4" as well as the amazing collection (and my introduction into Walker's solo career) "Boy Child '67-'70".

Hear "The Old Man's Back Again":