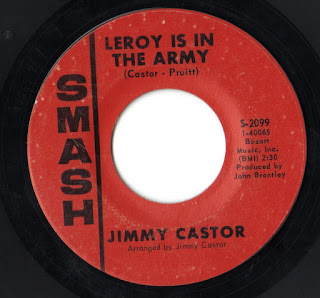 1. JIMMY CASTOR-"Leroy Is In The Army"
This was the follow up to Jimmy Castor's taunting/ Latin boogaloo smash "Leroy Your Mama's Calling". In fact I like it much better than it's predecessor because it's not as monotonous and certainly lyrically more hysterical.

2. BARRABAS-"Wild Safari"
Possibly the only redeeming thing about HBO's trainwreck of a TV show "Vinyl" (or as I like to call it "The Richie Finistra Cocaine Snorting Hour") was that one of the episodes ended with the Ryan/Quaid offspring (the show is all about star's children getting jobs), the Dwight Schrute of A&R (now consigned to the mail room) going to an underground club with his co-worker who looks like Juan Epstein's stoned older brother and the DJ is spinning this hypnotic funky little groover from 1972. 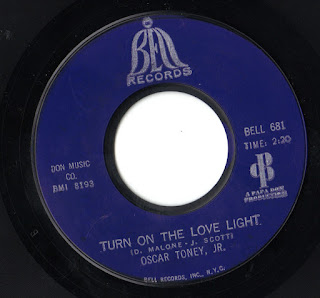 3. OSCAR TONEY JR.-"Turn On Your Lovelight"
One of my favorite readings of this Bobby "Blue" Bland's classic is this 1967 reading by Oscar Toney Jr. It eschews the usual arrangement that everyone else uses as a template and strips it down and rebuilds it into something quite incredible.

4. MADNESS-"Bed And Breakfast Man (Peel Sessions)"
This Peel session version of "B& B Man" knocks the stuffing out of the original LP version in my estimation.  Wow, what a punch!!

5. NINA SIMONE-"Mississippi Goddamn"
What the fuck is the world coming to people?  North Carolina?  Mississippi? Nina Simone's track still rings true 50+ years later....red state mentality where they'll let yahoos carry assault weapons into the supermarket but they're worried about what sex is using the restrooms and whether doing business with people from alternative lifestyles are going to raise religious objections. Sometimes, I am ashamed to be an American.....

6. THE ALLUSIONS-"Roller Coaster Man"
One of my fave Aussie 60's tracks is this jaunty little ditty with some powerful Kink "Tired Of Waiting For You" chords meets The Beatles "Help" album. 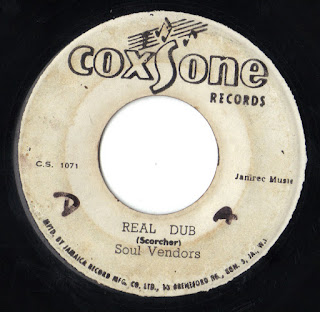 7. THE SOUL VENDORS-"Real Rock"
This 1968 reggae instrumental formed the backing track of Willie William's 1977 track "Armagideon Time" (later covered by The Clash). Here in it's barest form of bass, drums and horns it's trance inducing groove that I never tire of.


8. THEM -"Mighty Like A Rose"
There's a new deluxe three CD Them box set out.  I had previously passed on it as I had already had a two CD Them set, then I discovered the third disc was a bevy of kick ass BBC tracks and unreleased tunes like this rocked out Them version of "Mighty Like A Rose" and my fate was sealed. AND it has some incredible liner notes by Van Morrison who has a pretty crystal clear recollection of things!

9. THE DENTISTS-"Flowers Around Me"
Jangling, discordant, slightly out of tune guitars and lots of "la la la's", like a dole queue Byrds that's the best way I can describe these guys and their brilliant debut LP "Some People Are On The Pitch....".  Very little 80's music dated well for me but this album still holds it's own. 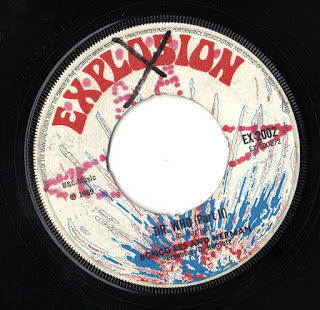 10. BONGO LES & HERMAN-"Dr. Who Pt 2"
With a shrieking horror style intro worthy of a Lee "Scratch" Perry record this number quickly develops into a funky little reggae instrumental that's bouncy and infectious thanks to it's organ and ringing bell and later a melodica . Written and produced by the great Derrick Harriott.