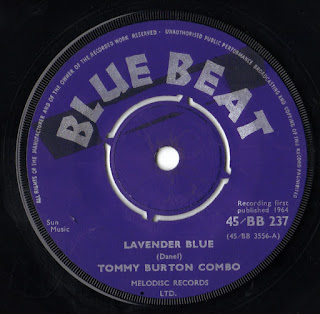 Blue Beat is of course primarily known for ska and mento records made by West Indian artists. There are of course a few notable exceptions where British artists cut some sides for the label. BB 237 from 1964 by the Tommy Burton Combo is one such disc. We profiled an earlier Blue Beat release by a British band way back when over here.  The band were led by the late jazz saxophonist/ pianist Tommy Burton and oddly this was his sole 45 release in the 60's.

"Lavender Blue" is a dreadful piece of faux ska akin to the horrid Migil Five.  It's a perfect example of a dance band deciding to become contemporary or hip and cash in on that "new crazy rhythm all the kids are on about". Predictably it fails miserably.

The flip side is where the magic happens! The band tear into Fats Domino's "I'm Walking" in an interesting mix that combines the guitar licks you'd find on a raw British beat 45 and a solid sax of a mid 60's British r&b record.  The vocalist has a raw voice that reminds me of the lead vocalist on some of the records by Liverpool's The Dennisons. The lead guitar playing reminds me of the style that Jimmy Page was fond of using at the time. Overall the number reminds me of The Dave Clark Five if they had a wild guitarist in the ranks and a jazz player on sax letting it wail.

The B-side screams for a reissue somewhere, but to my knowledge it has not popped up anywhere yet!