The Outer Limits were a British quartet from Leeds who took their name from the sci-fi TV series and were led by future star of "Christie", one Jeff Christie . This was their sole release on Deram (others 45's followed on Immediate and their offshoot Instant).  Originally released in the U.K. as Deram DM 125 in April 1967 it's American issue came out in June.

"Just One More Chance" is an amazing track.  The first time I heard it I swore it was The Action because the lead singer sounds so much like Reggie King it's uncanny and it sounds not at all unlike our Kentish Town mod heroes in their '66-'67 period. It's somber and soft but nonetheless incredible! 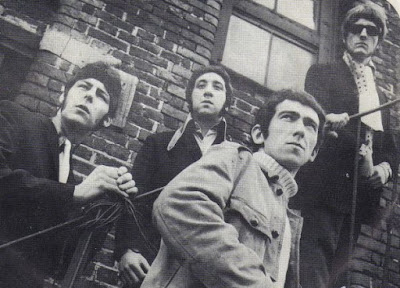 The flip sounds like an entirely different band (and it sounds like an entirely different lead vocalist but it's not, it's lead singer Jeff Christie with a cold, cheers to Ray who runs the Jeff Christie website for pointing that out).  "Help Me Please" is an upbeat slice of stuff that sounds like a frantic American mid 60's garage record with soulful vocals with it's supercharged combo organ  that recalls The Blue Magoos or The Outsiders.

The band also joined The Move, The Jimi Hendrix Experience, The Pink Floyd, Eire Apparent, Amen Corner and The Nice in 1967 for a famous (or infamous) package tour. Their next single "The Great Train Robbery" was issued as a promo only on Immediate in the U.K. and stock on the Instant label in mid 1968 and sounds entirely different.  Lead singer/lead guitarist Jeff Christie went onto the release the dreadful "Yellow River" as Christie in 1970. The other members were  Gerry Layton (rhythm guitar), Gerry Smith (bass) and Stan Drogie (drums).  More can be found about the band by going to this Jeff Christie website.

"Just One More Chance" appeared on the excellent Deram/Decca CD compilation "The Mod Scene" while "Help Me Please" was on their "Freakbeat Scene" CD as well as Bam Caruso's "Rubble 12: Staircase To Nowhere" LP/CD.

Bill
Have you ever heard this version? Rumored Curt Boettcher involvement.