Britain's Applejacks had soldiered on through five singles (six if you count the supposed "cancelled" "Chim Chim Chereee" which no one has ever seen a copy of) on Decca with only one semi hit (a Lennon/McCartney throwaway called "Like Dreamers Do", Decca F11916 June 1964 that rose to #20 in the U.K. charts).  They were sadly most known for that track and the fact that they had a female bass player.  Their line up was: Al Jackson (lead vocals), Phil Cash (rhythm guitar), Martin Baggot (lead guitar), Megan Davies (bass), Don Gould (keyboards) and Gerry Freeman (drums). Their run with Decca was about to end and though a revised line up would cut a halfway decent version of The Impression's "You've Been Cheating" for CBS (March 1967 CBS 202615) this would be the last offering by the original line-up.   I think it's their finest.

The Applejacks were essentially a squeaky clean, cheery sort of beat group who did both ballads and rocking sides (as evidenced by the flip side of "Like Dreamers Do", a stormer called "Boom Boom Boom (Everybody Fall Down)" and the catchy "Make Up Or Break Up", which was the B-side of their previous single Ray Davie's "I Go To Sleep", Decca F12216).  Rocking out was no difficulty for them and this kept them apart from the likes of The Mojos or Brian Poole and The Tremeloes.  This is no better evidenced by "I'm Through", a beat ballad (written by the great Pete Dello) with some excellent volume pedal guitar licks bending notes throughout the song while lead singer Jackson sings mournfully about an unfaithful girl who leaves him alone "while you go with other guys" with some groovy atmospheric backing vocals.  "We Gotta Get Together" is okay, but nothing special, mid tempo beat mediocrity sums it up nicely. After this single failed to chart and their Decca contract expired the band signed on with the Cunard cruise line and worked for the next few years as the "house" (boat?) band on various ocean liners with the previously mentioned CBS single (with a new lead singer) in between.

Reviewing it for "Melody Maker's" seminal "Blind Date" column in December 11, 1965 John Lennon had this to say about it:

"Is it the...oh, The Applejacks. I always liked the tone of the singer's voice. Don't like the songs or the arrangements they do, including the one they did of ours. Could be a bit of a hit. It's simple enough. Depends on what else is out. If there's nothing going on it'll be alright. Oh-oh, there's the Roger Williams piano again. That's enough, thank you sir (salutes)." 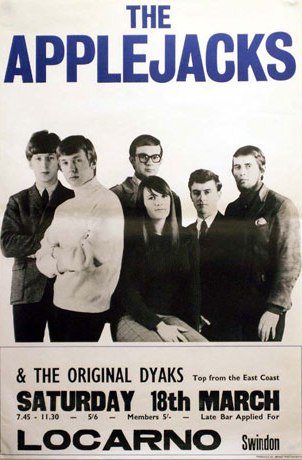 Cherry Red has reissued their untitled 1964 debut LP with all remaining Decca A and B sides (including both sides of this single) on it on a great CD compilation that is still, thankfully, in print.

Hear "We Gotta Get Together":

Email ThisBlogThis!Share to TwitterShare to FacebookShare to Pinterest
Labels: The Applejacks

As I recall the B-side does have a nice clanging guitar solo at least, unless I'm thinking of another one. I'll have to dig it out.... Do you know the Michael Lesley version of "Make Up Or Break Up"? I think Dello himself produced it. Completely blows the AJs outta the water. Killer fuzz and bashing drums and bizarre time signatures!

We finally get to hear the CBS 45!