The Bo Street Runners are one of those mid 60's U.K. r&b bands with a slim discography (just 5 seven inch records in the two years of their existence) but a powerful repertoire that all 5 are solid recordings. All killer no filler as one man said.

Their history has been documented elsewhere so I won't spend time on that.  Their line up at this point was: John Dominic (lead vocals), Tim Hinkley (keyboards), Gareth Thomas (guitar), David Cameron (bass) and Mick Fleeetwood (drums). This was their next to last release and it came out in June 1965. "Baby Never Say Goodbye" was written by Unit 4 + 2's Brian Moeller and Tommy Parker and was the first airing of the track (Unit 4 + 2 wouldn't release a version of it until February 1966 and The Rocking Vickers cut a version that wasn't released until 1995's collection of their work "Lifelines").  The Bo Street Runners version has always been my favorite. The suave lead vocals by John Dominic laid on top of a groovy Latin/bossa nova style beat are catchy and totally different from anything I have ever heard in the genre.  The organ trill after Dominic sings "love me in a thousand years from now" adds a groovy little kitsch feel to it and the organ adds to the percussion as much as Fleetwood's understated drumming. 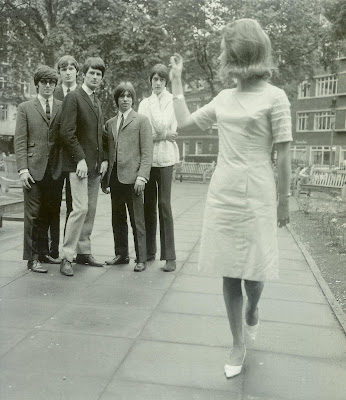 "Get Out Of My Way" is punctuated by some cool hand claps and a quirky organ lick.  Like the A-side it's an education in restrained, smooth, jazzy British mid 60's r&b.