I Wonder If They're Freaking Out In Queens...The Tea Company


Formed by the former members of group called The Naturals from Queens, New York, The Tea Company are famous for their mind blowing 1968 Smash records (US) LP "Come And Have Some Tea With Me" (SRS-6167105), one of the heaviest, trippiest albums the U.S. ever produced. Though at times it smacks of obvious "cash-in" drug connotations (in fact for ages I thought it was a studio only concoction), commercialism and the overblown trippy effects get a bit overwhelming it's got some brilliant moments. I was first played it by some friends in 1989 in between my first exposure to July and The West Coast Pop Art Experimental band and it blew me out of my head in a room of flashing strobes and black lights. The LP consists of only 7 tracks, two of which are on the long side (one, "Flowers" is 10 minutes and change and then there's a 8:47 version of "You Keep Me Hangin' On" that rivals the Vanilla Fudge version as "The Thing That Wouldn't End") . There is also an annoying 1:38 minute piece called "Don't Make Waves" that is entirely comprised of echo and other affects on the sound of dripping water!! Like much of the LP both tracks owe a great deal to British psychedelia with many of the tracks featuring vocals with a British accent (leading me to believe they were a British band until a distinct Queens accent convinced me otherwise on a spoken word part of "Love Could Make The World Go Round"). This is perfectly exemplified by "As I Have Seen You Upon The Wall" and "Make Love Not War" (which the lead vocalist sounds like Davy Jones from The Monkees) which is a nice slice of British pop psych inspired whimsy. Though I have been aware of their LP for over 25 years it was only a few months ago that I learned that two tracks from it were issued as a single : "Flowers"/"Come And Have Some Tea With Me". To my knowledge it was only pressed as a white label promo 45. 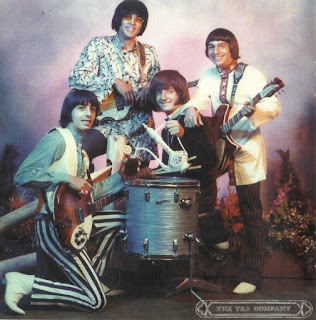 "Flowers" owes a great deal to the Small Faces.  It's an edited version at 3:10 (7 minutes of annoying sound affects chopped off the original album mix!). It's not their strongest track but it has a whimsy not unlike something from the SF's first US Immediate LP "There Are But Four Small Faces" (a mix of singles and tracks from the 1st Immediate LP) and the trippier elements of "Ogden's Nut Gone Flake". Like most tracks on the LP it relies on heavy effects of the drums and lots of lysergic effects on EVERYTHING. More times than often its a bit of a cacophony more than anything, obviously not adhering very much to the "less is more" effects maxim. To my ears it comes off like a bad trip at times.

"Come And Have Some Tea With Me" is far stronger.  Starting with the music from a child's wind up toy and some mind expanding phlanged horns (which feature prominently throughout the whole number) before the vocals come in above some tasty fuzz guitar and host of sound effects (including....the sound of a cup of tea being poured). The whole track pretty much encapsulates the so called "psychedelic experience" in a way I have heard few American artists outside the West Coast Pop Art Experimental Band manage to capture.

A CD of dubious nature (but excellent quality) is available of the entire LP with some bonus tracks by The Naturals. The 45 edit of "Flowers" was issued on the CD compilation "A Heavy Dose Of Lyte Psych" on the Arf! Arf! label and "Come And Have Some Tea With Me" was on the label's ""A Deadly Dose Of Wylde Psych" CD.

Hear "Come And Have Some Tea With Me":

Hear "As I Have Seen You Upon The Wall":