Manfred Mann's 8th single was, in my estimation, one of their greatest 60's sides. Their take on Maxine Brown's "Oh No Not My Baby" actually surpasses the original in my book. That's no mean feat to improve on a Maxine Brown record but the Manfreds did it. Here's how.

For starters it's faster, punchier, more up tempo and takes the ballad style of the original and turns it on it's head.  It kicks in with a rollicking mixture of brass, Hammond and Paul Jones powerful voice. The high hat gets hit and slashing guitar chords build and off it goes. Then there's a tasty bit in the middle where Mike Vickers plays a jazzy little vibes solo. 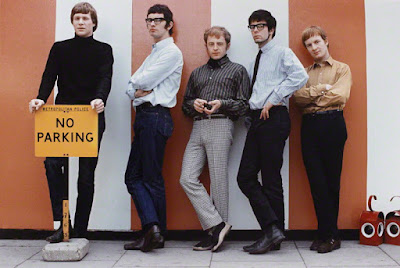 Drummer Mike Hugg's "What Am I Doing Wrong" is a jazzy little piece that would not be at all out of place on a Georgie Fame and the Blue Flames LP or B-side with it's Hammond/horns sound. There's sax solo followed by a very Graham Bond-ish Hammond solo.  A most different Manfred Mann track, Musically it's great but Paul Jones sounds somewhat uncomfortable on it.

Both tunes are found on the highly recommended 4 CD box set "Down The Road A Piece: Their EMI Recordings 1963-1966".


Hear "What Am I Doing Wrong":