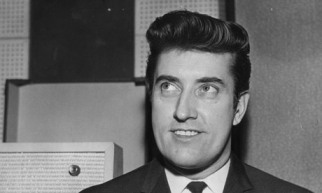 Picking 10 favorite Joe Meek productions wasn't easy, I could've just chosen the two Jason Eddie and the Centermen and David John & the Mood singles he produced and rounded that off with the last two Riot Squad 45's.    I've also omitted the more obvious one's like The Tornado's "Telstar" or The Syndicats "Crawdaddy Simone".

1. THE BUZZ-"You're Holding Me Down" 1966
Not to be confused with David Bowie's backing band these guys were actually Scottish.  The first time I heard this track was in the late 80's on a bootleg LP comp called "Searching in The Wilderness", shortly after it appeared in far better quality AND in it's correct length on Bam Caruso's "Freakbeat Fantoms" LP that didn't chop off it's frantic ending.  The whole track is a cacophony of fuzz guitar and depraved sounding vocals with typical Meek compression, the whole thing resembles a paranoid speed freak, something Meek was aware of.


2. PAUL & RITCHIE & THE CRYIN' SHAMES-"Come On Back" 1966
This was the final of three singles by this Liverpool band (all produced by Meek).  It was also among his last productions before his death in February 1967 and is easily his most "psychedelic".  It's haunting combo organ and distorted bass with swatches of slashing guitar bleeding through is hands down the most trippy thing Joe Meek ever did while the song itself has elements of U.S. 60's "garage" to it.  Meek's productions all but ignored psychedelia and he tended to utilize the same tricks he'd been using since the early 60's on all of his records right up until the end but this one seems a bit more "contemporary" than the rest.

3. THE TORNADOS-"Stingray" 1965
Meek produced a staggering 14 singles of these guys, this was among their last batch  and was their 12th.  It's a version of the Barry Gray theme song to the Gerry Anderson children's animated puppet show "Stingray" (which was incidentally his first color TV program).  Meek buries the theme underneath bubbling water sound effects, screeching sonic effects punctuated by male vocalists singing "stingray" over the top of a typical Tornados guitar/organ surf instrumental lick topped off by a frantic, wigged out guitar solo.
Hear it on: The Tornados-"Riding The Wind-The Anthology":

4. JASON EDDIE & THE CENTERMEN-"Whatcha Gonna Do Baby" 1965
Jason Eddie (real name Al Wycherley) was the brother of singer Billy Fury.  He never became as famous as his brother but his records were far better, especially his first two Meek produced 45's. "Whatcha Gonna Do Baby" is awash in swirling organ drenched in echo that sounds straight out of a horror film backed by Meek's trademark percussion (over miked tambourine, tom toms and floor stomping).  Penned by Cooper and Levine I'm curious to see if an American artist did it first?! Jason Eddie was no Billy Fury in the vocalist department but all of his tracks with Meek could've easily filled this list!

5. GEOFF GODDARD-"Skymen" 1963
Geoff Goddard's story is perhaps the saddest of all of Meek's cohorts.  He wrote and produced a great deal of material with Meek before their falling out in 1964 and never received critical acclaim or financial credit for any of his efforts. He cut 4 singles of his own with Meek.  This was the final one from October 1963.  Keeping with the wave of success with The Tornados "Telstar" (which Goddard playing keyboards on) and the "space" theme Goddard warbles on about extraterrestrial visitors offering a message of peace with similar "Telstar" style effects.

6. GLENDA COLLINS-"Something I've Got To Tell You Baby" 1966
Joe Meek had very few female vocalists on his roster but none better or as well known as the dynamic Glenda Collins. The track, the ultimate musical confession of infidelity, was written by Ken Howard and Alan Blaikley and had previously been recorded by The Honeycombs on their second LP "All Systems Go" where it showcased for the first time, drummer Honey Lantree on lead vocals ( it also cropped up on Dave Dee, Dozy, Beaky, Mick and Tich's debut LP).  I think Glenda's February 1966 version is the definitive one in my book.  Meek took no chances and secured the services of arranger Ivor Raymonde to wrap it up in strings and massive orchestration, but in the end sadly it was not a hit despite the stellar arrangement and Collin's powerful vocals .

7. THE HONEYCOMBS-"That Loving Feeling" 1966
This September 1966 release was the band's final offering after a string of ten singles under Meek's tutelage.  My old pal Keith Patterson once aptly described it as "The Honeycombs outdoing The Episode Six" which is a true assertion as the numbers harmony male/female vocal style is akin to to that of The Episode Six's records.  Starting out with a part raga/ part Flamenco guitar lick it has a slight Middle Eastern feel and is carried by Honey Lantree's backing vocals and the compressed combo organ (and a typical echo drenched guitar solo).

Hear it on: "The Best Of...Produced By Joe Meek " (out of print but available for download through iTunes and Amazon.Com)
https://youtu.be/79gAJNybTtA


8. THE RIOT SQUAD-"I Take It that We're Through" 1966
This was the band's second of 4 singles recorded at 304 Holloway Road (their fourth and final single was Meek's last causing a friend to quip "it was so late it practically had Meek's brains on the master tape reel") and it's my favorite.  It combines some wild sonic reduction on a fuzzed out guitar lick while the compression on the saxophone bends the sound so it remsembles some sort of Middle Eastern reed instrument whilke the band's high pitched backing vocals are given the Meek touch.

Hear it on The Riot Squad "Jump" and "Joe Meek Freakbeat: You're Holding Me Down":


9. DAVID JOHN & THE MOOD-"Diggin' For Gold" 1965
The last two of three singles by this killer r&b combo were produced by Meek.  "Diggin' For Gold" is probably the quirkiest.  It's piano solo (with muted hammers, a fave Meek trick) is pure Joe Meek as are the backing vocals and the compressed drums/percussion.  The gritty vocals come to an ubrupt end after a frenzied build up (ala "You're Holding Me Down").

10. THE BLUE RONDOS-"Baby I Go For You" 1964
This blistering guitar work on this track is often erroneously credited to Jimmy Page, and was also said that it was none other than a young Ritche Blackmore. I have also read it was the band's lead guitarist Roger Hall.  Regardless it's a primnitive slice of gritty proto-freakbeat by this North London five piece characterized by some searing guitar licks and an over the top solo with typical Meek percussion behind it all. 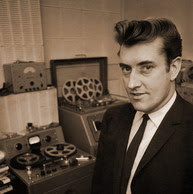 My personal favourite is 'Can't Get Through To You' by The Honeycombs... in fact I may do a post about this 45 on my own blog!