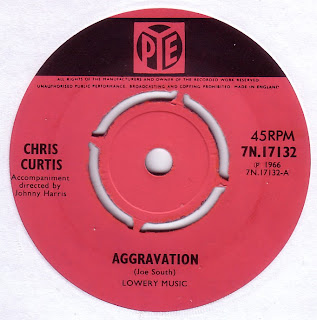 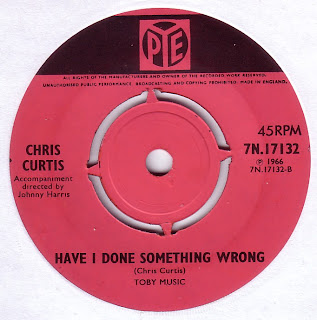 The story of ex-Searchers drummer/lead singer Chris Curtis is a sordid one that could easily make for a depressing but interesting bio pic like "Telstar" did for Joe Meek. Born Chris Crummy (I'm serious) he founded The Searchers and sang on quite a few of their numbers as well as penning several B-sides and LP tracks before being booted out in 1966 after a somewhat disastrous Australian tour with The Rolling Stones. Known to many on the pop scene for his gobbling handfuls of speed and his twitchy/uptight mannerisms, George Harrison is alleged to have nicknamed him "Mad Henry" .  Posted below is a famous clip of the band playing the "NME Pollwinners Concert" in '64 doing "What'd I Say" where he is completely, presumably out of his head on uppers.  Watch how his band mates, especially guitarist Mike Pender, stare incredulously at him: His hyperactivity (no doubt a by product of his massive speed consumption) and homosexuality were well known in circles at the time (both Bill Wyman and Dave Davies have documented some of his semi-seedy/druggy behavior in both of their books) and led to more than their share of problems in his career. It has been said that The Searchers original bassist Tony Jackson was given his walking papers after attempting to blackmail the band's manager for a bigger cut by threatening to "out" Curtis.  In his very last interview Curtis intimated that Jackson "threatened Tito Burns (the band's manager) that he'd reveal something about me to the public", a move which saw Jackson out and in came ex-Cliff Bennet's Rebel Rouser Frank Allen. The band finally had enough of his speed induced behavior and paranoia and he left in March 1966. 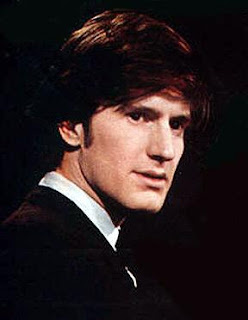 Curtis was nonetheless a very affable man who's pop contacts enabled him to cut a solo single in June of 1966.  "Aggravation" is an uptempo cut written by Joe South (more on him in a bit).  Curtis' ear for good American tunes often meant that he was the man behind many of the tracks The Searchers covered from both publishers demos (he was a champion of Jackie DeShannon) and cover versions of tracks like "Love Potion Number Nine".  He also authored and produced the amazing "Snakes Snails & Puppy Dog Tails" for Alma Coogan in 1965.  On "Aggravation" Curtis had the assistance of Jimmy Page, John Paul Jones and no doubt female vocal group The Breakaways.  It's a rather swinging number in sort of a Tom Jone's "discotheque" way with it's horns, female backing vocals and driving beat and is carried quite well by Curtis' strong voice.  It blew me away the first time I heard it on a PRT records 10" E.P. called "It Happened Then" in the mid 80's.  The flipside is a composition of his own called "Have I Done Something Wrong" (perhaps a thinly veiled message to his ex-bandmates?).  It falls flat for me because it's sort of cod country, the production is amazing and it's got lots of nice touches but the song itself is just a "cry in your beer dirge".  For Scouser sh*tkickers only I'm afraid.

The single failed and the vinyl world heard no more of Chris Curtis (though versions of "Baby You Don't Have To Tell Me" and "I Who Have Nothing" from presumably the same session, have popped up on the "Rare Unearthed Merseybeat" series) but he continued producing records, among them "I Love how You Love Me" By Paul & Barry Ryan and a version of The Hollie's "Have You Ever Loved Somebody" by Paul & Barry (which went up against a version by his ex-bandmates).  By 1967 he had added L.S.D. to his drug diet and the stories only grew in outrageousness and number. Curtis of course will be forever credited (somewhat erroneously) as the man who formed Deep Purple albeit as an idea called "Roundabout".  Speaking to "Mojo" a few years ago organist Jon Lord attempted to clear up some of the misnomers on the subject.  He was never in the running for the drum spot, they weren't room mates (Curtis was dossing at Lord's apartment) but several facts, according to Lord ARE true: Curtis introduced Lord to the man (Tony Edwards) who would become Deep Purple's manager, he covered Lord's apartment in tin foil while Lord was off touring with The Flowerpot Men and he suggested a German based guitarist named Ritchie Blackmore to him.  There is conflicting stories about another Joe South recording called "Hush" which would give Deep Purple their first hit (in America anyway).  Curtis claimed in an interview with Spencer Leigh in "Record Collector" in 1998 that he played Lord the Joe South original when they were "roommate's", Lord maintains they'd heard Billy Joe Royal's version in lots of clubs/ballrooms where it was a big dance floor hit.  Who's to know?  Since Curtis did already record a Joe South track his story is plausible.

To my knowledge neither side has seen any sort of CD reissue, though it is possible it's been slipped on a Searchers CD anthology as they shared the same label.

Hear "Have I Done Something Wrong":

Great posting, Wilthomer! Really appreciate all of this information and being able to see this wild performance of What'd I Say. Off to listen to Aggravation . . .

This is an excelent post on 'Mad Henry'.....You're right about him pushing the limits on this clip. I'd definately say he was purple pilled right up to the 13th floor.