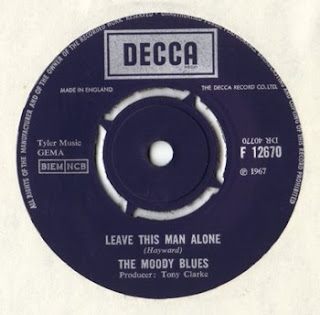 When we last left our heroes The Moodies they'd just released their first single with Justin Hayward and John Lodge (see August 25th 2009's entry) in May '67. In August of that year they returned with their next Decca seven incher (and their last before switching to Decca's Deram imprint) .

"Leave This Man Alone" is perhaps the most powerful Moody Blues single ever. It's phlanged guitar is both ethereal and trippy making this perhaps the most "rocking" thing they've ever done in my estimation. The number is perfectly accented by the band's harmonies behind Justin Hayward's impassioned vocals. "Love And Beauty" on the flip side is a composition by keyboardist Mike Pinder, who not only sings it but provides piano and Mellotron on the track. This is the first Moodies track to feature the instrument which would resonate heavily on the bulk of their 60's material. It's slightly melancholy, with some lush harmonies and some socially introspective lyrics built around Pinder's resonating piano underscored by some faint Melllotron. The single failed to chart like it's predecessor. But happy times were just around the corner with "Night In White Satin" gaining a release in November and putting the band on top once again.
Both the A and B side of this single turned up on a now out of print Decca CD "Prelude" which contains various Decca/Deram mark two Moody Blues A's & B sides and unreleased numbers. "Love And Beauty" also cropped up on the Decca/Deram "The Psychedelic Scene" CD comp. 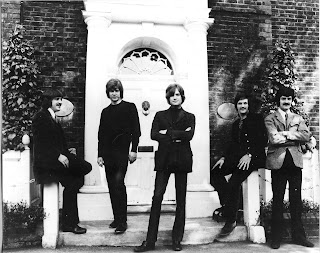