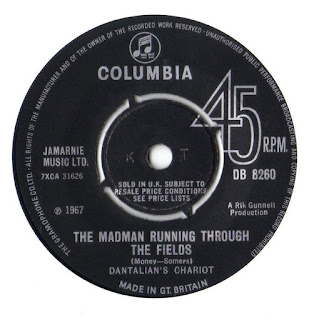 Psychedelia pretty much helped kill the U.K. 60's "mod" r&b scene. Granted by the dreaded "Summer of Love" in 1967 anyone who's been slogging out the Gunnell brothers "Hammond and horns" circuit since 1963 were pretty much priests of a dead god by this point. Georgie Fame was decidedly in between jazz and M.O.R at this point, Chris Farlowe had left the Thunderbirds and was cutting records on Immediate that had sitars and tabla (dig his version of "Moanin'" Immediate IM 056 June 1967) and The Graham Bond Organization had previously issued in February the downright freaky/spooky "You Gotta Have Love" (Page One POF 014, ditto on this one too)! and what were Zoot Money's Big Roll band up to? See for yourself in January 1967:


But by the summer of 1967 fragments of The Big Roll Band: Zoot and his B-3 Hammond, guitarist Andy Somers (later Summers when he became a mega star in the Police) and drummer Colin Allen chucked the r&b/soul covers and stage antics of Zoot dropping trou to pursue psychedelia (no doubt fueled by the LSD ingestion, read Andy's excellent autobiography to get the full story!) full on as Dantalian's Chariot in time for the "Summer of Love". They were joined by Pat Donaldson (bass) . As you can read in Andy's book the far flung provincial gigs must've been quite a weird scene when the band, all clad in white, all played white instruments unleashed their light show and psychedelic sonic assault on the audience! 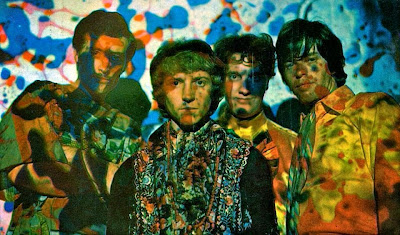 "The Madman Running Through The Field" is just that, nothing short of a psychedelic/sonic assault. From it's intro (a high pitched whine) and backwards cymbal, Zoot singing "introspective" lyrics (is it inspired by the "I Ching" or "R.D. Laing" or both?) that are interrupted by an clanging/disjointed guitar chord (which Somers/Summers said he re-utilized on The Police hit "Walking On The Moon"!) and this trippy fey organ that faintly grooves in the background. Toss in some mellow flute during the breaks and the whole thing winds up as a clanging, distorted psychedelic clash! One listen and you'll join me and the other legions of 60's British psych fans who hold this one in high esteem! "Sun Came Bursting Through My Cloud" comes from the pen of the great Tony Colton. He was responsible for some killer 45's on Pye and composer of The Shotgun Express "I Could Feel The Whole World Turn Round" (see Fe. 11, 2009 blog post) , Georgie Fame and The Blue Flame's unreleased classic "Red Number Nine" and The Merseybeat's "I Stand Accused" (later covered by Elvis Costello). "Sun..." is at odds with the A-side as it's completely "light", not in an "M.O.R." sort of way , more like The Rolling Stone's orchestrations on "Back Street Girl". The vibes add a slightly jazzy touch. One wonders why this was chosen as a flip such a monster cut like "Madman", but being the Summer of Love maybe this was the "yang" to side A's "yin"?

When Dantalian's Chariot folded Zoot Money and Andy Somers became full time members of Eric Burdon & The Animals. The band's 1968 LP "Love Is" contained a 17 minute plus opus titled "Gemini/Madman" that ended with "Madman Running Through The Fields" (sung by Burdon) that's worth checking out. 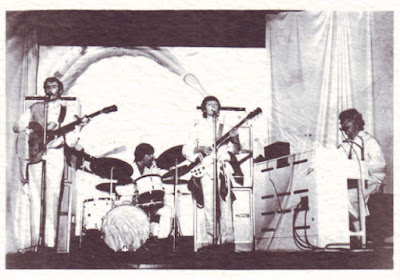 "The Madman Running Through The Fields" has appeared on Bam Caruso's "All The Colours Of Darkness" (Rubble 8) as well as on the "Rubble One" box set and on Rhino's Nuggets II: Original Artyfacts From The British Empire And Beyond" box set. It also joined "Sun Came Bursting Through My Cloud" on the now out of print (and horribly expensive) Dantalian's Chariot LP/CD compilation "Chariot Rising".


"The Madman Running Through The Fields":

"Sun Came Bursting Through My Cloud":