1. THE BLACK DIAMONDS-"See The Way"
The A-side to the famous 1966 Aussie freakbeat track "I Want, Need, Love You" is this high powered folk rock meets twangy surf jangler that could easily pass for a Californian record from the same time period.  Pure magic!

2. ANGELIQUES-"Sunshine Boy"
One of the highlights of Big Beat's new CD compilation of Swedish female pop tracks "The Girls Want The Boys: Swedish Beat Girls 1964-1970" is this pseudo psych pop track from 1968 that's sung in English and bears a passing melodic resemblance to The Hollie's "Have You Ever Loved Somebody". It stands shoulders above the mundane elevator pop on most of the comp.

3. DAVID BOWIE-"Art Decade"
Along with his 60's output the Bowie "Berlin trilogy" is one of my favorite periods of his.  "Art Decade" is one of those tunes that I really have to be in the mood for but the melody always sucks me in and stays in my head for days.

4. THE FEDERALS-"Boot Hill"
Clavioline's and spooky ethereal vocals were not purely the Joe Meek domain in the U.K. 60's as evidenced by this incredible 1963 instrumental 45 on the Parlophone label.

5. BOUJOURA-"Looking For That Land"
Here's a freaky 1969 track that the great Tony Sanchez in San Diego hipped me to many moons ago by a Dutch gal named Boujoura written  by The Golden Earring's guitarist George Kooymans. Her voice isn't terribly strong but the arrangement is amazing and the the tempo changes are wiggy.

6. JEAN PIERRE MIROUZE-"Sexopolis"
Stumbled upon this funky little easy/kitsch/lounge number from 1971 from a film called ""Collective Marriage" (or in France "Le Mariage Collectif").  It's a wash of groovy organ, lush kitschy strings and a totally boogaloo groove ! 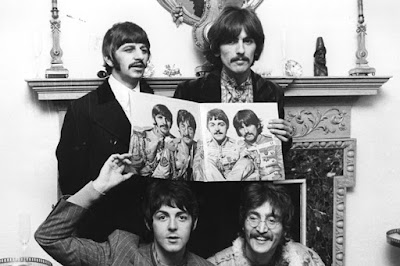 7. THE BEATLES-"She's Leaving Home"
Since I first discovered "Sgt Pepper" almost 4 decades ago I continuously skipped over this track and it was not until recently that I came to appreciate the track. Lyrically I think it's one of The Fab's best social commentaries and is equal to anything Ray Davies was mining at the same time.

8. HICKORY-"Green Light"
Here's an odd one , a cover of The Equals track from a British band from 1969 on the (U.K.) CBS label that later became Flaming Youth (and featured Phil Collins) .

9. ADAM, MIKE & TIM-"Little Pictures"
For several decades this ditty was on multiple dodgy Small Faces compilations as "What's The Matter Baby", clearly it wasn't a cover of the Timi Yuro track and it wasn't until years back it was unveiled as a cut called "Little Pictures" by this U.K. trio.  Regardless it's a nifty folky pop tune with odd lyrics and a slight baroque feel.

10. CHARLES MINGUS-"Freedom"
In this new day and age of racism, xenophobia and hateful intolerance ushered in by the new President let us turn to the words of Mingus:

This mule could be called stubborn and lazy
But in a clever sorta’ way this mule could be workin’,
waitin’ and learnin’ and plannin’
For a sacred kind of day
A day when burnin’ sticks and crosses is not mere
child’s play
But a madman in his most incandescent bloom
Whose lover’s soul is imperfection and is most lustrous
groom.

So, stand fast there young mule
Soothe in contemplation
That burning whole and aching thigh
Your stubbornness is ever living
And cool anxiety is about to die