In honor of Derv Gordon's impending U.S. one off gig in California (more info here) I decided it would be fun if I came up with my 10 favorite Equals tracks.


1. "Baby Come Back" UK 45 President PT 135 1967 B side/ 1968 A side
My intro to the Equals came via this track, though my first hearing was a watered down ska/reggae version by a band called The Equators in the early 80's.  It wasn't until a DJ on my local college radio station (WPRB 103.3 FM) spun this track on their Friday night 60's program in 1984 that my ears were pricked up.  I loved the  incessant riff, the ska groove and being a dyed in the wool teenage mod was impressed that they mentioned "rude boy" at the fade out along with some ska style vocal percussion. It was the band's only #1 in the U.K. and a massive hit on the Continent and reached #32 in the U.S. Top 40.

2. "Reincarnation" US LP track "Baby Come Back" RCA LSP-4078 1968
My first Equals album was the US RCA LP "Baby Come Back" that was a wonderful mish mash of material, among the many cool tracks it contained was this tune which originally appeared on their third U.K. LP "Sensational". "Reincarnation" follows yet another catchy guitar riff and some great choppy stop/starts creating an excellent groove.

3. "The Guy Who Made Her A Star"  UK 45 B-side President PT 200 1968
Yet another inclusion on the US RCA album was this stormer that's one of the handful of Equals tracks that wasn't written by a band member. My first introduction to the track came via the '79 mod band The Purple Hearts who included it on their 1981 E.P. "My Life's A Jigsaw".  The original of course destroys all comers and it's one of my favorite tracks by them with some powerful vocals.

4. "Butterfly Red White And Blue" U.K. E.P. track President PTE 1 1968
Starting out with some mellow Hendrix influenced licks this track takes it down a notch from the bands usual stomping, amphetamine 100mph party but works perfectly thanks to it's soulful delivery that reminds me of Wilson Pickett. It's also written by Lincoln Gordon, who's song writing credits did not appear or a lot of Equals tracks. 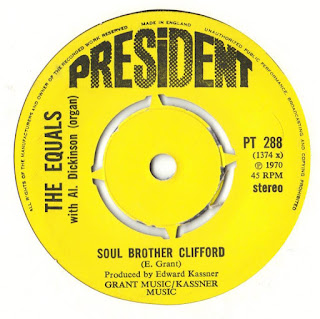 5. "Soul Brother Clifford" UK 45 President PT 288 1970
Driven by some powerful football chant backing vocals and funky organ (care of one Al Dickinson according to the label) "Soul Brother Clifford" is one of the band's most infectious, rousing and cheeky numbers and is the epitome of a party encapsulated in a seven inch piece of plastic.

6. "Lonely Rita" U.K. 45 B-side President PT 222 1968
On the flip of the equally powerful "Softly Softly" comes this powerful track that combines slashing guitars, a Bo Diddley beat and a wall of sound vocally. The best part is the last 30 seconds where it grows with intensity! 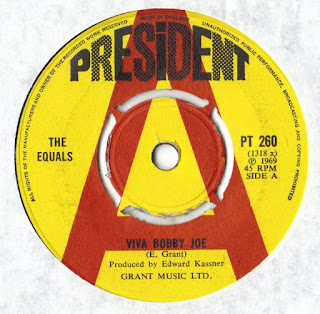 7. "Viva Bobby Joe" UK 45 A-side President PT 260 1969
The rousing "Viva Bobby Joe"is driven by some terrace worthy backing vocals, high octane hand claps sawing strings and flute creating an incredible groove. It rose to #6 in Britain becoming the band's second biggest U.K. seller. The Beatle-esque strings at the end are a nice touch that give it a "Hey Jude" feel.

8. "Skies Above" UK 45 B-side President PT 180 1968
Lead by some thunderous drums, harmonica (not on the LP version) and a "Pictures Of Matchstick Men" type groove the band veer the closest they ever came to psychedelia with this lyrically brief number with the same two verses repeated like a mantra and some cool high backing vocals that sound like a police siren. Which leads us to....

8. "Police On My Back"  German 45 A-side President 19 750 AT 1967
Like "The Guy Who Made Her A Star" and "Baby Come Back", "Police On My Back" was known to my ears by a cover version first when The Clash covered it on the excessive "Sandinista" triple album (and did it justice). The original was waiting for me in 1985 when I snagged the indispensable US "Baby Come Back" LP. On top of a jogging beat with some zoomy bass runs and guitars mimicking police sirens the Equals offer an English take on the ska/reggae theme of boys on the wrong side of the law. Oddly it was only issued on 45 on the Continent.

10. "Soul Groovin'" UK LP track "Sensational" President PTL 1020 1968
Equals tracks with horns were few and far between and they were best suited for amped up tunes like this.  Beneath a groove laid down by tight horns and funky bass and drums lending a Archie Bell's  "Tighten Up" meets The Mohawks "Baby Hold On" style feel to it and Derv's double tracked vocal this number never ceases to move a dance floor and it's a damn shame it was never a 45.