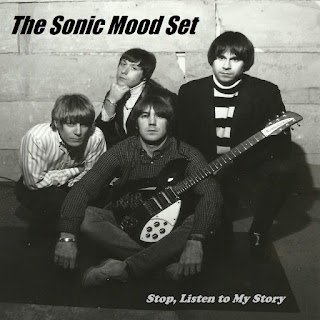 In 1997 four guys from Bethlehem Pennsylvania's Creatures Of The Golden Dawn left lead singer Mark Smith to form their own band called The Sonic Mood Set.  Michael Rafolowich (guitar/vocals), Michael Vallone (guitar/vocals), Stu Rutherford (bass/vocals) and Kevin Groeller (drums/vocals) were a tight, red hot quartet who played mostly originals with the occasional cover in a distinct freakbeat/garage music vein.  They released one record, a 45 (featuring a version of Fire's "Father's Name Is Dad" b/w "I'm Real", a tune written by Jim "Harpo" Valley) on Aspirin Smash in 1998. They even made a promo video for "Father's..." which until now I had never seen before (see below)! Their star shone bright but sadly their lifespan was somewhat short if my memory serves me correctly they lasted little over a year or so. But that was then, and this is now....

I had the pleasure of booking them several times the play my DJ night Hub City Soul where they always put on a great show to a packed room of very appreciative mod/skins/60's types and walk in's off the street. Recently seven unreleased songs that they recorded at the legendary Brooklyn studio Coyote (R.I.P.) back in 1997 have become available through Bandcamp.  You can listen to and purchase them here. Both sides of the Aspirin Smash 45 are available there as well.

The newly unearthed "Stop, Listen To My Story" E.P. is an incredible slew of razor sharp originals in a distinctly freakbeat/mod pop art/garage vein without an ounce of plagiarism, aping or rehashing. "Walking The Buzz", "Don't Hang Around", ""What Hit Me", "Stop, Listen To My Story", "They Call Me Dissatisfied", "She Gives Me Action" and "Baby I Need" are all high octane numbers played on vintage instruments recorded in the highest quality. Highly recommended!!!!!