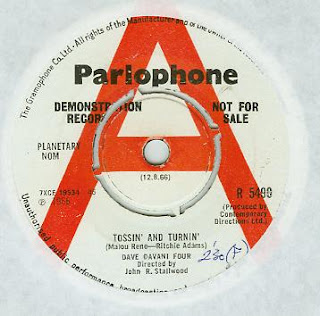 This was the third single by the unsung U.K. Hammond r&b Dave Davani, and his second for the Parlophone label.

"Tossin' And Turnin'" is a fairly pedestrian, perhaps even ill advised cover of the Bobby Lewis hit, not terribly interesting by any scope of the imagination. The musical backing is decent enough but the number is dead boring and Davani vocals sound thoroughly uninspired.  But the B-side, "The Jupe", now that's where we're cooking, with gas kids. It's a brilliant organ fronted instrumental piece that's semi jazzy but catchy and fast enough to be danceable. In my estimation it's one of the great U.K. Hammond instrumentals up there with Zoot Money's "The Mound Moves", Georgie Fame's treatment of "Last Night" or The Graham Bond Organization's romp through "Wade In The Water".

The line up at the time of the recording of this single was: Dave Davani (organ, vocals), John Milner (guitar), Beryl Wayne (aka Mrs. Dave Davani,vocals and percussion), Mik Ewan (bass, harmonica) and Chaz Burton (drums).

Both sides were collected on the highly recommended Dave Davani Ace Records CD reissue of his LP "Fused" with bonus singles tracks and liner notes by our old pal Nick Rossi, no stranger to Hammond r&b/jazz.