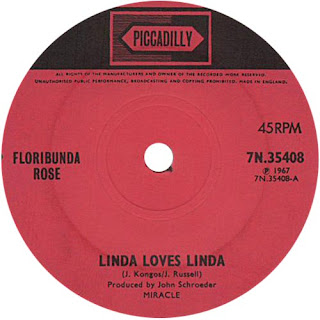 One of the greatest things about being a mod in the 80's was when the latest volume of Bam Caruso's "Rubble" series would come out and I'd snag a copy in NYC at either Venus Records or Midnight (though usually at Venus because my main man behind the counter, Ron Rimsite would gave me a break on the price of spin me the choice cuts beforehand). Rubble Volume 10 "Professor Jordan's Magic Sound Show" turned me onto this band and this single's A-side(named after a type of rose, how's that for flower power).  They were put together by South African ex-pat John T Kongos (get the full story from "Shindig!" magazine)and this was their sole 45.  You can also read up on them here:

"Linda Loves Linda" is a perfect piece of Pye/Piccadilly '67 pop sike, not overly trippy bit containing the right amount of strings and precise pop production (c/o our hero John Schroeder) with some wiggy bits.  Lyrically it's a nice ditty about a spoiled rotten self centered little narcissist named Linda with great harmonies, a cool "fairground" music organ in the middle and a nice psychedelic fade out ending. "One Way Street" the flipside is more rocking per se, no strings, just an upbeat tempo with some intricate licks that are interwoven together like something The Move would do on their early singles and once again there's some great harmonies.

Both sides are not unlike Pye label-mates The Montanas (who were also on Rubble Volume 10 with the brilliant "Step In The Right Direction") who mastered the harmony/pop precision/intricate licks formula quite well themselves.

Both sides were issued on the John T. Kongos CD compilation "Lavender Popcorn" that chronicles his various 60's projects (this band, his next act after this single called Scrugg and solo material). "Linda Loves Linda" is also on the "Rubble One" box set and the now out of print "Real Life Permanent Dreams" which is without a doubt the finest UK 60's psychedelic box set bar none.