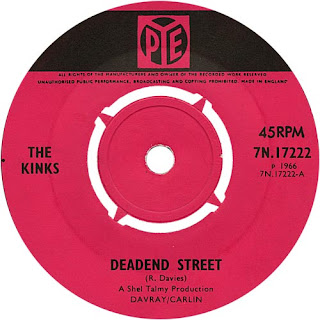 It's tough for me to pick a favorite Kinks single, but I think the winner would ultimately be this killer two sider from Autumn 1966.

Back in the early 90's I was in a bad way for a few months and "Dead End Street" literally spoke to me, with a two roomed apartment on the second floor, a leaky kitchen sink (and ceiling), no job, no money, no long distance plan for my house phone, no cable, and heat that worked intermittently I was in quite a bad place.  I liked the track even before then but it gave me some sort of "hope" shall we say and it became a mantra to sing to myself when it all got to be too much.  I still see folks walking everywhere in the morning or riding their bikes up the highway while I'm driving to work in a nice warm Mini Cooper and feel like a prat for having it so good and I think back to when I didn't have it so good.  This is probably the first Kinks record to utilize brass with it's subtle trumpet  and the descending bass line/ main riff comes straight from the school of "Sunny Afternoon", lyrically Dickensian at it's best it still holds up all these years on and rates as one of Ray Davie's best fictional social observations, a genre he mastered so well.

On the flip is another great fictional "social observation" by Ray Davies, "Big Black Smoke".  It's a jaunty tale of a small town girl who left her little life for the big city where she wound up turning tricks, giving her money to a cat named Joe and spending the rest on purple hearts and cigarettes (Ray seemed to write a lot about girls leaving home back then, "Polly" and "Rosie Won't You Please Come Home" are two that spring to mind).  Years ago I dated someone who often held this utterly ridiculous idea that speed was okay in moderation and this track rankled her, I didn't date her very long.   Oh back to the song....sorry....it retains a bit of "rocking" that steers it clear of the sort of knees up/music hall sound a lot of  late '66-'67 Kinks records had (never a bad think but always refreshing when they showed they still had the stuff).

TRIVIA:Some copies (like mine above) were misprinted as "Deadend Street".

A very good choice for a Kinks single, although my personal choice would be "Days"/"She's Got Everything". It's amazing that it was their Christmas 1966 hit, considering the downbeat theme. It went up to #73 here in the States, their last charting US single until "Victoria" in '69.

Don't you think that the video mix of the song is a bit faster in the tempo? Another alternate/demo version is in the Picture Book box set.

Finally, here's a ripoff, erm, reimaging, of the video/song by another set of Battling British Brothers, the Gallagers of Manchester:

Here's a link to the Billboard Single Spotlight page for its December 17, 1966 edition, putting "Dead End Street" as a probable Top 20. You would have done better if you put your money on "Gimmie Some Loving" or "Friday On My Mind", both of which did a lot better than the Top 60:

An excellent choice, this one. "Big Black Smoke" irks my wife as well for some reason, probably because she gets irritated by sixties tunes written by men about "lost" and hopeless women. I always thought it was a picture-perfect study of what was undoubtedly a common scenario at the time.