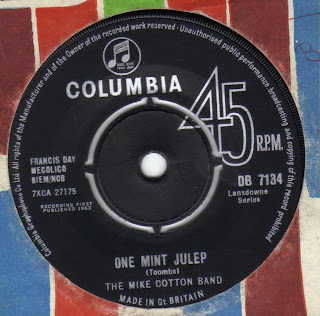 
This was legendary U.K. jazz/r&b trumpet legend Mike Cotton's second single. The previous 45 "Swing That Hammer" b/w " Heartaches" U.K. Columbia DB 7029 was released earlier in 1963 and credited to Mike Cotton's Jazzmen, it was more of a "trad jazz" 45 ala Acker Bilk (and garnered them a #30 on the U.K. charts, Mike cottons only visit to the Top 40).  I bought a copy of it for £2 and it was DEAD boring bearing no resemblance whatsoever to his next four brilliant singles on Columbia.

Our single in question today mark's Mike Cotton's first venture into the jazzy r&b being played by contemporaries like Georgie Fame & The Blue Flames, Chris Farlowe & The Thunderbirds and The Graham Bond Organization.  The version of "One Minute Julep" is fueled by some very strong horns and though not as great as the Ray Charles

"One Mint Julep" appeared on the instrumental CD compilation "Instro-Hipsters A Go-Go 2". Both sides of this 45 appeared as bonus tracks on the bootleg CD reissue of their rare as hens teeth untitled LP on the Rocking Beat label, who though on the never never always turn out a great sounding product!

I know the Mike Cotton Band mainly from their stint as the horn section for the Kinks in the early '70s (Muswell Hillbillies/Everyone's In Showbiz).

That song in that video clip that you have (from a Morcombe & Wise show) sounds like the theme for the Jeeves & Wooster TV series.