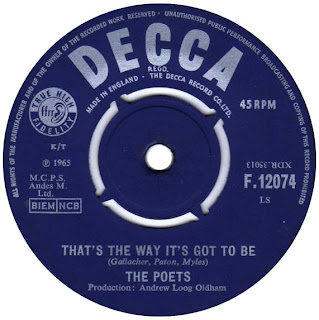 One of the crowning moment's on the Bam Caruso LP "Rubble 5: The Electric Crayon Set" was this amazing second 45 offering by Glasgow's Andrew Loog Oldham produced Poets.

I've often called The Poets Scotland's answer to The Zombies, I think it's because they both used amplified acoustic 12 string guitars on some of the best records (hear The Zombie's "I Don't Want To Know" for reference) and both group's placed a heavy reliance on heart strung numbers about romantic angst.  February 1965's "That's The Way It's Got To Be" follows the precedent set by their debut 45 "Now We're Thru" (see "Anorak Thing" November 18, 2010) by again utilizing this distinct sound from lead guitarist Hume Patton (who along with lead singer George Gallacher and rhythm guitarist Tony Myles wrote both sides of this 45).  It's also fattened up by some six string bass that rumbles along, esp. effectively during the intro in tandem with the twelve string (the bass was reputed to be played by session player extraordinaire Jack Bruce).  "I'll Cry With the Moon" is more somber but accented by some cool acoustic guitar and has a VERY Zombies feel to it and sits nicely alongside moodier pieces by the St. Albans lads like "I Must Move" or "Don't Go Away".


"That's The Way It's Got To Be" is one of the most reissued Poets tracks having cropped up on the earlier mentioned Rubble volume (and included on the "Rubble One" box set) as well as Decca Deram's "The Mod Scene" and Rhino's essential "NuggetsII: Original Artyfacts From The British Empire And Beyond 1964-1969" box set among others.  "I'll Cry With The Moon" is on "Rubble Volume 6:The Clouds Have Groovy Faces" which is is included in the "Rubble One" box set, which is equally essential.  Both sides were also included on the dodgy "In Your Tower" CD comp of their material and the hard to get but much better Poets CD comp "Scotland's No. 1 Group". In 2011 both sides were compiled for CD on The Poet's "Wooden Spoon:The Singles 1964-1967" which is, just that (no bonus cuts unlike "Scotland's #1 Beat Group").
Hear "That's The Way It's Got To Be":

Hear "I'll Cry With the Moon":