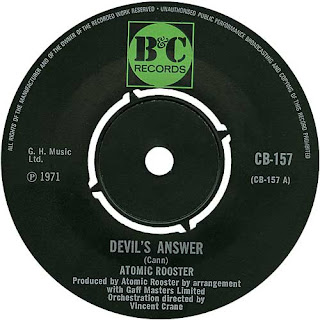 Formed in 1970 the by two ex- member's of the Crazy World of Arthur Brown (organist Vincent Crane and drummer Carl Palmer), the group had one of the most rapidly changing line-ups in British 70's rock n' roll history!  The band's line-up at the time of this single (their third) was : John Du Cann (ex-Andromeda) on guitar/vocals, Vincent Crane (organ) and Carl Palmer (drums).

I discovered Atomic Rooster thanks to the amazing British TV show "Life On Mars" which made use of "Devil's Answer", "The Rock" and "Ear In The Snow".  I was hooked.

"Devil's Answer" is a punchy little number that kicks off with a very cool Hammond intro and then some brass.  The simplistic main riff is catchy because it's forceful, repetitive and has a great beat. Du Cann's guitar solo on it shines because it's short and sweet, not your typical 70's guitar hero crap and sounds straight off of a post freakbeat '68 single.  "The Rock" is a bit heavier. It's an instrumental pierced by Du Cann's guitar and strung together utilizing some soulful brass.

Both sides have been collected on the essential Atomic Rooster double CD "Heavy Soul".