1. GIUDA-"Number 10"
I have sort of a love/hate relationship with Giuda.  I like some of their stuff, while other material seems watered down like Big Boss Man covering Iron Virgin.  This track from 6 years back is still my fave, a nice blend of punky bootboy stomp with some more power pop influenced glam, still it beats 90% of the shit out there at the moment.

2. GUN-"Take Off"
Gun were always a bit too heavy for me but I dig the hell out of this tune because it reminds me so much of the "S.F. Sorrow" era Pretty Things, even if at 11 minutes and change its a bit too long.

3. JOHN VINCENT & THE IN-SECT-"Ow Ya Goin'"
While searching YouTube for a late 60's Aussie tune by these guys called "Madge's Charity Badges" I came across this 1967 track by them that was issued on the flip of a cover of "Over Under Sideways Down". If you've never heard anything from the 60's by John Vincent you're in for a treat as I am always amused by his Australian colloquial vernacular .

4. JOSEFUS-"Crazy Man"
I heard this one on the Netflix original series "Narcos" (along with a host of other cool tunes) and It blew me away. I know these guys are pretty heavy and not really my thing but this one hits me between the eyes and reminds me a lot of Gun (see above). 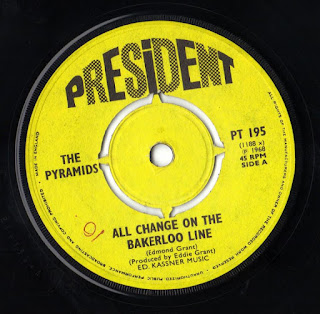 5. THE PYRAMIDS-"All Change On The Bakerloo Line"
Written and produced by Eddie Grant (and that's him on backing vocals too) this track, like quite a few other Pyramids tunes sounds a lot like The Equals with more of a rocksteady leaning and horns, which in my book is a winning combination.

6. THE PINK FLOYD-"Remember A Day"
Reputedly cut during the "Piper At The Gates Of Dawn" session (it wasn't, it was recorded in October 1967 at the same time as work was started on "Vegetable Man" and "Jugband Blues), "Remember A Day" showcases some brilliant Zippo slide guitar and a separate track of ominous, chaotic feed backing slashing from Syd Barrett while Rick Wright sings wistfully (he wrote the track as well). It's worth noting it's one of three tracks to feature Syd Barrett on the band's second LP "A Saucerful Of Secrets".

7. THE WHO ORCHESTRA-"Waltz For A Pig"
A brilliant instrumental dirge of Hammond and horns issued on the flip of "Substitute", "The Who Orchestra" were of course the Graham Bond Organization helping The 'Oo out due to a bit of contractual difficulties that preventing them from issuing any more recordings . Written by drummer Ginger Baker (credited as "Butcher") the royalties enabled him to buy a brand new Rover 3000.

8. THE FRAYS-"Keep Me Covered"
This 1965 Decca B-side is one of the most frantic examples of mid 60's British r&b that you are ever likely to hear.  Wailing harp competes with bluesy guitar and the most incredible driving/zooming bassline at a 100 mph amphetamine pace while the lead singer brags "you're just one of many females and I like to take my time..". 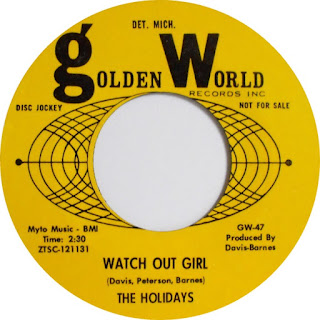 9. THE HOLIDAYS-"Watch Out Girl"
From the flip side of their Golden World debut 45 "No Greater Love" (GW-47 February 1966) this mid tempo groover from this Detroit combo is a nice mix of sax, vibes and guitar with a distinctly Motown (no doubt perhaps containing some moonlighting Funk Brothers?) flavor to it. 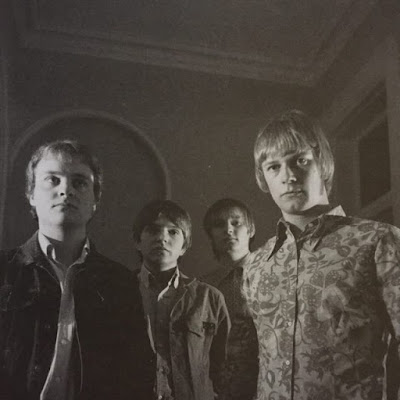 10. THE PRISONERS-"The Last Thing On Your Mind"
I went through a bit of a Prisoners phase after re-reading "The Kids Are All Square" and really cottoned to this tune which I'd previously not really had an opinion on.  With it's phlanged piano opening lifted straight off the Small Faces "Ogden's Nut Gone Flake" and underlying dark, foreboding undercurrent it's a brilliant track easily carried by Graham Day's soulful but gravely vocals and guitar hero genuis.