This was The Riot Squad's second 45 and their first and only, to my knowledge U.S. release (it appeared in the U.K. as Pye 7N.15817 in March 1965).  It also came in a picture sleeve (see below) something my white label promo copy did not have. It was however from a time period where the band were led by future solo artist Graham Bonney and under the wing of Kinks associate Larry Page, the band's recordings with the legendary Joe Meek would not begin until early 1966.  Indeed their final single ( "Gotta Be A First Time" b/w "Bitter Sweet Love" U.K. Pye 7N.17237) would also be Meek's final single, coming out a few weeks before his death.

"I Wanna Talk About My Baby" is a mellow  but groovy little track with touches of jazzy sax, a groovy little organ solo and vocals obviously influenced by Georgie Fame's Mose Allison meets King Pleasure vocal style. Atmospheric and cool as hell, this to me exemplifies British 60's "mod jazz".  The flip side is far more upbeat and more rocking with a cool sax solo and organ solo, equally "mod jazz" but also a tad "rock n' roll", or as they called it on the liner notes of a Georgie Fame mid 60's LP "rockhouse".

Shortly after the single's release connections with Larry Page allowed them to join our r&b/Blue Beat heroes Mickey Finn & The Blue Men on a spring 1965 tour with The Kinks.  This was cut short due to the infamous Mick Avory's cymbal VS. Dave Davies head incident! 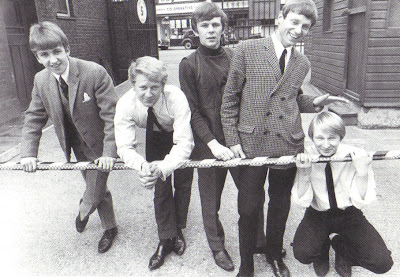 Both sides appeared on Sequel's excellent "Jump!" CD compilation that collects all seven of the band's Pye singles as well as a slew of unreleased Joe Meek produced numbers (including the storming "Yeah Yeah Yeah" cut with Meek's favorite female product, Glenda Collins). 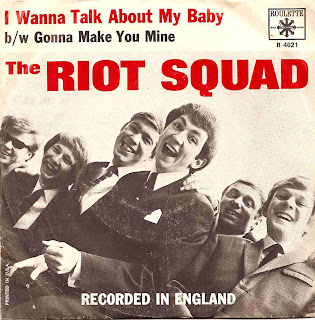 Rare U.S. picture sleeve copy of the 45 courtesy of:

ADDENDUM:
We got these e-mails from bassist Brian Davies, cheers for writing Brian, we're always happy to have someone sort our facts out! :

can someone alter the write up on the riot squad please, the bass player was myself (brian davies)
the blonde one in the photo,  some other write up,s also have a mike martin, he might have been
in the riot squad 2 which was formed after mitch,graham,mark, bob and myself disbanded.

By the way, graham and i are still in touch after all the years
hes living in germany where he is a big star, we lost mitch a few years ago,
but sax player bob lives in venezuela and has written a book about the riot squad,
a year after we disbanded we became the biggest selling band over there,
by that time everybody had moved on, graham had his hit record "supergirl"
mitch had joined georgie fame and i joined dave edmunds, mark stevens
we lost touch i think someone said he,s in america, i still play bass now and again
but i am live engineering as well, with "the american drifters" and phantom of
the opera star peter karrie,

I'm obviously spending vast swaths of my day going back through your blog! How DO I get updated on posts anyway? Btw, I had two different Meek-era Riot Squad US 45s, one on WB (maybe "Cry Cry Cry") and one on HBR ("I Take It...").

You can subscribe to posts on the main page I believe.