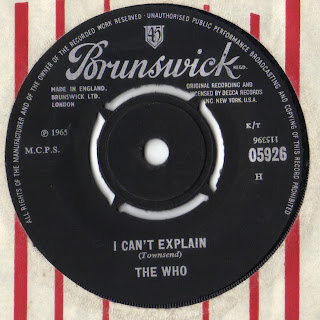 Where to begin....unless you've had amnesia or have spent a lifetime in a cave in the Himalayas you can't help but be familiar with with the power pop prototype that is The Who's "I Can't Explain".  Just a few short months (6 to be exact) after releasing a single as The High Numbers ("I'm The Face"/"Zoot Suit" U.K. Fontana TF 480) the band had ditched their aping of U.S. r&b tunes and lead guitarist Pete Townshend began branching out and writing his own original (and what he deemed at the time on a BBC session as "commercial") pop compositions.

From it's Kinks inspired ringing Rickenbacker opening chord intro to it's smooth high backing vocals (care of The Ivy League) the number exemplifies "power pop" in the purest mid 60's Anglo pop sense.  This blue print of short bursts of basic chord progressions with high register backing vocals spawned countless other bands like The Eyes, The Game, The Smoke, The Favourite Sons and dozens, if not hundreds more. Keith Moon's sloppy drums accented by some well place hand claps (but not Jack The Barber this time) tie it all up in a nice little package. Produced by Shel Talmy it ranks, to me, as one of the most classic moments in the history of British 60's rock n' roll.

I first heard it on a New York FM rock n' roll station, possibly WNEW, at the onset of my mod-dom.  I was immediately captivated (having only been familar with "My Generation") by what I heard and even more so when the DJ told us it was The Who.  My friend Woody was happy to announce that not only did he own the track on his "The kids Are Alright" double LP but that he'd gladly let me take such "rock n roll bullshit" off his hands for free.  Sadly the version contained on it was the "live" on "Shindig" version full of screamagers and off key harmonies, I had to wait another year before purchasing "Meaty Beaty Big And Bouncy" to acquire it. Twenty years later I had both the original U.K. and U.S. 45 pressings (actually two U.S. pressings, the rainbow Decca label and the pink Decca label), and still do, some things you just don't part with.