I first heard "The Champ" by The Mohawks at an Empire State Soul Club dance back in the late 80's (1988 I'm thinking?), who if you don't know, were, bar none, THE best soul night New York City has ever seen, nor will see as far as I'm concerned (I was proudly, one of the first 100 members, member #73 to be exact, still have my old membership card). Back then there was of course the typical rumors (all untrue) of who they were that have long since been settled in even the most provincial of places (like New York City in the 80's). 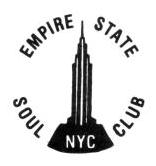 Anyway this was the debut single by organ master Alan Hawkshaw's wonderfully funky and camp studio musician consortium known as The Mohawks.  It first was released in the U.K. on Pama (PM 719) in 1968.  What prompted a U.S. release I will never know!  Loosely based on the main riff Otis Redding/Carla Thomas vehicle "Tramp" (well more than loosely, outright plagiarized I'd call it!) "The Champ" follows the typical Mohawks formula of fluid organ lines from Hawkshaw's Hammond, female backing vocalists repeating the title and horns behind it all.  The flip side we have "Call Of The Witch Doctor" which is quite a departure from The Mohawks material. For starters it's not heavy on the organ and sounds like a calypso/ska track (nicking it's intro/main riff from "Sweet Soul Music") with use of some very ska horns (complete with a Rico-esque trombone solo!), not a bad track at all, just not what you'd expect!

Both cuts surfaced on the CD/LP reissue of their legendary LP "The Champ" on Vampisoul Records.

Hear "Sound Of The Witch Doctors":

Alan Hawkshaw reunited some years back with his studio cohorts and played a series of gigs as "The KPM All Stars" (KPM stands for Keith Prowse Music, a studio music library), one of which from London's Jazz Cafe can be viewed below where Alan Hawkshaw leads the band through "The Champ":

Email ThisBlogThis!Share to TwitterShare to FacebookShare to Pinterest
Labels: The Mohawks Alan Hawkshaw

Post request: a write-up on the ska/rocksteady version. I'd love to know more about what the story was behind that.

The B-side is also... er... let's say "borrowed", from Elmer Bernstein's "Theme From The Magnificent Seven", but more directly from the arrangement used in a long series of Marlboro commercials. Here's one version of the commercial: