Georgie Fame is one of my favorite 60's British artists ranking right up there with The Small Faces, The Kinks and Bowie's '65-'67 output.  And like The Small Faces and The Kinks you can find a variety of picture sleeve 45's and E.P.'s by him out there.  Fame released 6 E.P.s in the U.K. for the Columbia label, this was his fourth, released hot on the heels of his U.K. #1 "Yeh Yeh".  Oddly all four tracks on the E.P. had previously seen issue on his 2nd U.K. LP "Fame At Last" (Columbia 33SX 1638), which coincidentally featured the same cover shot as today's E.P. subject!  The Blue Flames line up at this time was considered by many to be their "classic" line up composing of Mick Eve (tenor sax), Johnny Marshall (baritone sax), Tex Makins (bass), Speedy Acquaye (congas) and Red Reece (drums). My copy, as scanned above was autographed by the man himself at a gig during a week long residency at the Blue Note in New York City, he made it a point to tell me that if you looked closely at the photograph on the LP you'd notice his fingernails were dirty!

Fame's treatment of  Ray Charles "Get On The Right Track, Baby" is well known and he adds his own bit of jazziness to the number but keeps it pretty faithful to Brother Ray's with the exception of a slight increase in the tempo (and sweetened by Speedy's congas and some nice sax work, a trademark of the '64 era Blue Flames). Gene McDaniel's "Point Of No Return" is no carbon copy either. Fame and Co. take the sharp punctuations of the original and turn into into a more swinging number by adding some tasty Hammond/sax action from the get go. In fact it ranks as one of my fave tracks by the band from this era, fattened up by a very smooth sax solo by Johnny Marshall and Speedy's incessantly pleasant conga drums. Mose Allison's "I Love the Life I Live" is next up, it is pretty faithful to the original but with Georgie replacing the stride piano with some tasty Hammond and his own laid back vocal mix style.  The always hysterical "Gimme That Wine" originally cut by Lambert Hendricks and Ross, closes the E.P.  Fame pulls out all the stops in cheekiness whilst sticking to the originals arrangement but adding some twists of his own c/o his trademark groovy "Hammond n' horns". 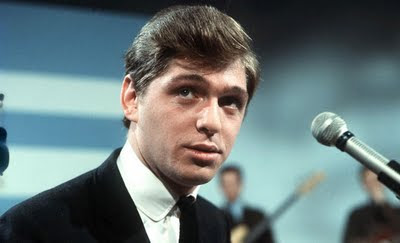 You can find "Get On The Right Track Baby" and "Point Of No Return" on two essential Fame CD's (both still in print) the famous "20 Beat Classics" and more recent "The Mod Classics '64-'68". "I Love The Live I Live" can be found on "20 Beat Classics" and the budget compilation "The Very Best of.." CD.  All of the tracks are also available on the essential Georgie Fame and the Blue Flames 5 CD box set "The Whole World's Shaking".

Hear "Get On The Right Track Baby":

Hear "The Point Of No Return":

"Anorak Thing" wishes to thank Nick Rossi for his informational assistance in the composing of today's post.
By Wilthomer - November 02, 2011

"Get on the right track" is one of the most beautiful Fame songs! Great.

Love the guy! I've been looking for Georgie Fame's Somebody Stole My Thunder on 45 for a while and can't seem to put my hands on it. It's bloody rare AND expensive. But I would be ready to pay a pretty penny for that sweet Georgie voice with an amazing bonus fuzz guitar intro. I wouldn't mind having that signed cover you have either. Nice one buddy!

Mods' #1 and my absolute favourite.