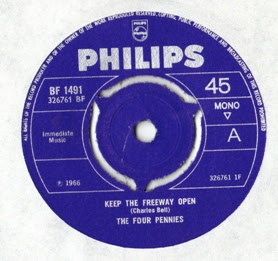 The Four Pennies get slagged off quite often because of their tepid hit "Juliet" (which was actually a B-side)!  They actually had some killer tunes, among them a rollicking reading of  Leadbelly's "Black Girl" (Phillips BF 1366 October 1964), an interesting take on Buffy St. Marie's "Until It's Time For You To Go" (Phillips BF 1435 September 1965), an upbeat single originally cut by Bobby "The Polish Prince" Vinton called "Trouble Is My Middle Name" (Phillips BF 1469 February 1966) and a Georgie Fame-ish number called "She Didn't Say Yes" on their 2nd LP "A Mixed Bag" (Phillips BL 7734 1966).

Today's article in question is their next to last of six singles for the Phillips label before the band went bust in late '66 (with bassist Fritz Fryer moving on to A&R/production work and handling numerous cool sessions like The Open Mind!) and in my opinion it's their best with both sides being equally amazing. Released in the Summer of 1966 it's not at all different from the beat/ballad style they employed on their earlier sides relying heavily on some tight harmonies and lead singer Lionel Morton's strong vocals.  "Keep The Freeway Open" starts out with some jangly guitars that remind me of The Poets or the Zombies and has a rapid fire vocal delivery with some clever rhyming.  It's a ballad of sorts but it's so wonderfully done it's not at all twee or sappy.  "Square Peg" follows the same formula but with more treble on the guitar adding an almost "British folk rock" feel to it.  It's also possibly one of the handful of British beat songs about a guy in jail because he killed someone!  The backing vocals add layers of texture beneath the

Both sides have been compiled on a budget U.K. CD called "The Very Best Of.." 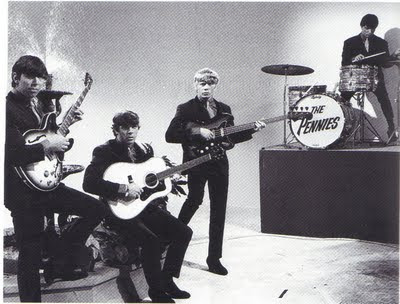 Email ThisBlogThis!Share to TwitterShare to FacebookShare to Pinterest
Labels: The Four Pennies