The Applejacks, as we've discussed in earlier posts were unfairly maligned  for a variety of reasons in the 60's.  The sexists dismissed their having a female bassist as a gimmick and their hit reading of Lennon and Macca's "Like Dreamers Do" forever consigned them as musical footnotes in the great catalog of "bands who's Beatles covers gave them their only hit".  I wholeheartedly disagree and feel that The Applejacks, despite a few weak tracks, are on the whole a pretty rocking group.

Today's article is a U.S. pressing (in fact it's the only U.S. Applejacks single I've come across) of the band's U.K. debut 45 (Decca F 11833, February 1964). "Tell Me When" is an upbeat ditty propelled by the band's tinny, tinkling piano and happy go lucky feel.  "Baby Jane", written by the talented Pete Dello (later to front the Deram act and write other Applejack's tracks "It's Not A Game Anymore" and "Make Up Or Break Up") is one of their most rocking sides.  With a driving beat, cool bass runs and a punchy feel it is set apart from so many mediocre 60's British beat group records!

The band would go on to cut six more singles for Decca, their next being their highest charting (#20) U.K. hit "Like Dreamers Do" five months after this debut. 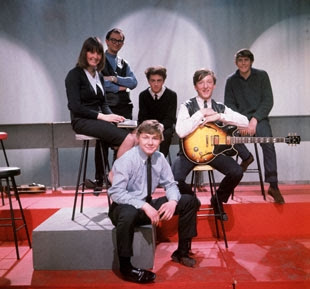 Both sides are included on the highly recommended Applejacks complete Decca recordings anthology, a CD reissue of their untitled Decca LP put out by Cherry Red.

For a cool interview with their bassist Megan Davies go to:

Email ThisBlogThis!Share to TwitterShare to FacebookShare to Pinterest
Labels: The Applejacks