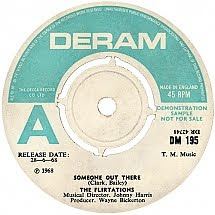 Deram didn't get anymore soulful than The Flirtations, a genuine U.K. based American soul trio consisting of sisters Ernestine and Shirley Pearce and Viloa Billups. All the band's Deram releases were produced and arranged by Deram/Decca in house producers/A&R men Wayne Bickerton and Tony Waddington (both Liverpudlians and former members of Lee Curtis and The All Stars and The Pete Best Four).  The pair also wrote nearly all of their tracks as well. 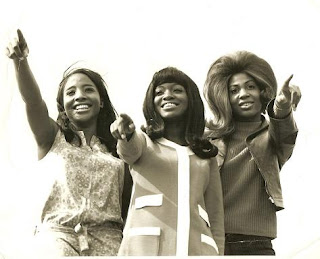 This single was their first for Deram,  preceding their monster smash "Nothing But A Heartache".  It hit the streets in June 1968 and unfortunately did not chart as high as it's successor. "Someone Out There" was arranged by Johnny Harris and produced by Wayne Bickerton.  It's more of an uptempo ballad, but it's brassy punch and strong vocal delivery by the three gals makes it an infectious winner.  The flip side, "How Can You Tell Me" is far more uptempo than the A-side with a hint of the chemistry that would soon explode on "Nothing But A Heartache" nearly six months later thanks to it's throbby bass, percussion, vibes and phased horns.

Both tracks are available on the CD reissue of their U.K. LP "Sounds Like...".

Hear "Someone Out There":

Hear "How Can You Tell Me":