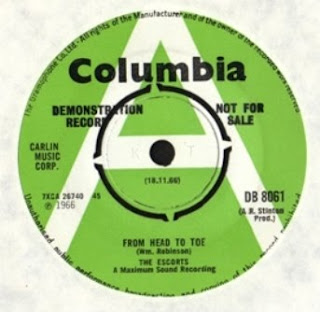 THE ESCORTS-From Head To Toe/Night Time U.K. Columbia DB 8061 1966
By November 1966 when Liverpool's Escorts had released what would be their final single things had changed. After 5 singles and almost a two year spell at Fontana the band were released from their recording contract without a hit to their name.  Coming into a record contract quite late in the "Merseybeat boom" (their first 45 was from March 1964), the band probably didn't have much of a chance despite making some very good records.  By late 1966 their line-up had changed considerably seeing lead singer Terry Sylvester head off to The Swinging Blue Jeans (and then onto The Hollies to replace Graham "California" Nash) and a host of others come and go.  I've tried piecing the line-up changes together but to little avail.  Google searches for "Escorts Liverpool" come up with some very seedy websites......
On their final single cut for EMI's Columbia outlet the band was lead by new lead singer and Liverpool face Paddy Chambers (recently ex of the trio Paddy, Klaus & Gibson and also a veteran of Faron's Flamingos and The Big 3).  Their A-side was a cover of Smokey Robinson & The Miracle's LP track "From Head To Toe" (also known to us Mod Anorak's by Chris Clark). The track also featured the tambourine accompaniment of fellow Liverpudlian Paul McCartney who accompanied Chambers to the recording session.  Musically it's quite interesting and though it's certainly no storming effort like EMI labelmate's The Action it still has merit.  I like the simplicity of it: bass, guitar, drums and piano with Paddy Chambers singing soulfully yet restrained and the call and response falsetto backing vocals.  The latter and the former come into play again on the flipside, a Paddy Chambers original called "Night Time" that benefits from some soulful delivery.  Both sides were collected on the Escorts Edsel records LP/CD compilation "From The Blue Angel".
The Escorts on German TV's "Beat Club" plugging "From Head To Toe":
By Wilthomer - May 03, 2010

It is awesome! Anyway, I like the way you explained the Escorts topic with such details. Thanks
Escorts in Liverpool