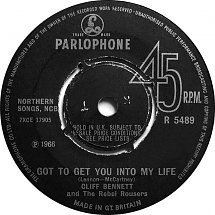 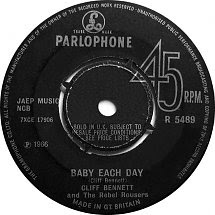 Few Fab Four covers rarely come off and if and when they do they're rarely better than the original.  There are exceptions and we here at "Anorak Thing" take pleasure in sharing them with you (see October 23, 2008 entry).  Cliff Bennett and The Rebel Rousers were one of those great British 60's groups who had the chops, put on a great live show, had the great EMI behind them, looked mod as hell but existed pretty much on covers of American records.  Most of the time they did a good job at it.  Being on EMI they rubbed elbows with The Fab Four and on occasion toured with them. This association led to Paul McCartney offering Cliff and Co. a track from their yet to be released LP "Revolver" called "Got To Get You Into My Life" which they began playing  and the decision was made to release a version as a single with Macca duly producing in a session at EMI's  Abbey Road facilities (walking there from his nearby flat in slippers). 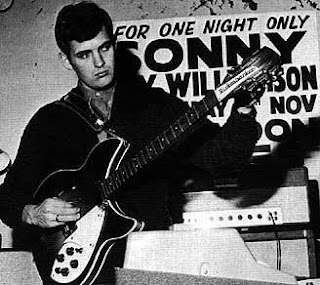 Though I won't say it betters The Beatles version it's equally on par thanks to a rush of horns, some solid drumming (way better than Ringo's in my book, and I'm saying that with peace and love) and a nice wash of Hammond hidden in the intro.  Cliff Bennett's vocals are as strong and confident s always and add a more soulful touch to the track than The Beatles version.  The British record buying public must've dug it too because it became the band's biggest hit reaching #6 in August 1966.  The flip "Baby Each Day" is probably my favorite track by the band (tied with their reading of "Three Rooms And Running Water") and it's a rare instance of a band original (composed by Cliff).  It's soulful in delivery and the horns and stops/breaks are thoroughly "American" sounding .  Amazing stuff.  Both cuts are on the CD reissue of their 1966 LP "Got To Get You Into Our Life".