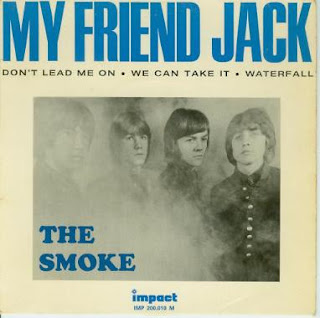 Paul Weller once observed "In general you can't put a value on style because it's so personal. Perhaps that's it's appeal. It's like a million people telling me that Picasso was a genius; well, I think he was shite and that a French Small Faces EP cover can piss all over any of his paintings".  Ask any vinyl nutcase about French 60's EP sleeves/covers and they'll all agree, they're works of art regardless of whether they're jazz, Motown or British 60's freakbeat like our article in question here.  Content wise they were always cool too because they'd take a single and it's B-side and add either another single and it's B-side or in the case of this here Smoke E.P., two LP tracks.

I needn't trouble you with a history of the U.K. foursome known as The Smoke.  They never made it big in their home country of the U.K. but were quite popular on the continent as there miscellany of amazing looking German and French picture sleeves will attest to.  Best known for "My Friend Jack", a tremelo laced groover that got them in trouble with some stuffy censors back home for the offending line "my friend Jack eats sugar lumps" (as in the practice of  dropping L.S.D. on a sugarcube).  Luckily the alternate version was not released (where the previous line added "oh what beautiful things he sees").

Anyway as you can hear "My Friend Jack" is a powerhouse.  A tad overplayed but still brilliant. It's normal 45 rpm flipside, "We Can Take it" is another amazing slice of clasic mid 60's British proto freakbeat with some nicely descending melodic licks, choppy power chords on the verge of feeding back and all.  Great stuff! The next two tracks are culled from their legendary 1967 German only LP "It's Smoke Time". "Don't Lead Me On" has some nice throbby Motown-ish bass and the expected slashing guitar, in fact The Smoke rarely had any numbers with restrained guitar, the exception being our next track "Waterfall".  "Waterfall" is a ballad, the only ballad I know of in their catalog.  It's at odds with their sound but it works because it's subtle and not too sappy or cheezy.

All four cuts are available on a variety of Smoke CD's floating around out there from the "It's Smoke Time" plus bonus tracks LP CD to the 46 track comp CD "High In A Room-The Anthology". 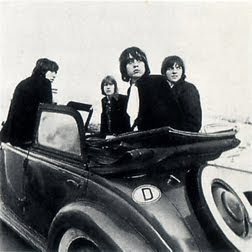 Hear "My Friend Jack/We Can Take It":

Great post. Infact I've enjoyed reading your posts for some time now. Sorry I've been slow to give you feedback.

I first heard The Smoke on one of those ropey 80s psych comps. They totally knocked me out.

Weller's comment on Picasso oddly echoes the Terrence Stamp charachter in William Wyler's creepy classic The Collector. He always struck me as something of a knucklehead, that quote surely proves it.

Nice...I've loved the song for a long time, but never looked for a video. Thanks for posting it.

Ah yes - The Smoke on Beat Club from the Marquee. Great clips, even if DLT's Abe Lincoln beard gives me the creeps.

Wonder if the reason they mimed was that they had imbibed Moon level doses of that week's horse tranq de jour - look how dilated their pupils are. Wonder if they had to be propped up as in one of Lemmy's Hawkwind tales.