SOUNDS OF '66:THE SOUTHERN SOUND 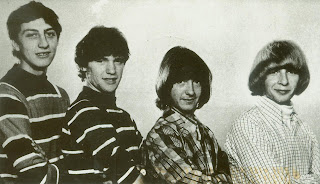 THE SOUTHERN SOUND-Just The Same As You/I Don't Wanna Go U.K. Columbia DB 7982 1966
Wow!  It doesn't get any better than this, or does it?  Nevermind,.  This is a two sider sizzler by a U.K. foursome first brought to my attention back in the 80's on one of those dreadful (quality, packaging etc) "Electric Sugarcube Flashbacks" compilation LP's.  Like most records/bands of this genre this was their only release. Original copies will run you a ghastly $500-$1,000!  And there's even a crazy Norwegian issue in a picture sleeve (see below) that set you back for even more.  Luckily I got to have both tracks in nice quality a few years later (1987 or 1988 I think) on Bam Caruso's "Rubble Volume13: Freakbeat Fantoms", easily their best volume EVER!

"Just The Same As You" is an archetype freakbeat number.  It starts out with a slightly distorted and perhaps ever so slightly out of tune riff that leads into some sullen lead vocals with some very echo-laden backing vocals. The lead vocalist reminds me a bit of Don Fardon of The Sorrows with that sort of deep/moody voice.  On the flipside we have "I Don't Wanna Go", which is a more frantic number.  The sped up riff and echo drenched backing vocals seem to recall Joe Meek at his finest (as in The Buzz "You're Holding Me Down" or The Syndicat's "Crawdaddy Simone") and there's plenty of wiggy tempo changes to add the "freak" quota to this rave -up beat number.

Both sides cropped up on the Rubble Volume 13 "Freakbeat Fantoms" LP/CD comp and can be found on the essential more recent "Rubble Box: Two".  A version was also recorded by a German cat named Knut Kieswetter and it shows up on the equally cool first volume of Rob Bailey's "Le Beat Bespoke" CD comp series. 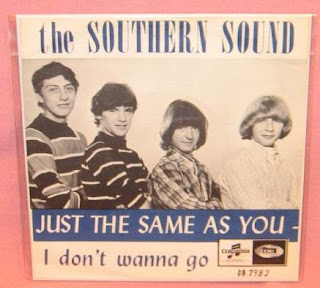 (Above) Spare a grand for a rare Norwegian P.S. copy?

Hear "Just The Same As You":