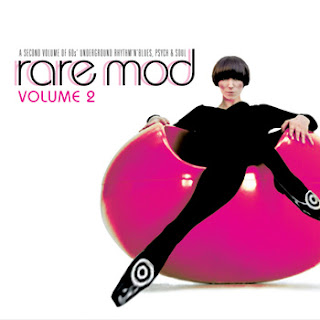 "Mod" is thrown around so often on CD compilations these days.  It's usually some cheesy affair of a bunch of Kinks, Searchers, Petula Clark and even (on occasion) 60's Bowie cuts with "mod" tacked on, more bullshit than bulls eyes or an excuse to cobble together a bunch of lame '79 bands.  Far from being a catchphrase to the folks at Acid Jazz it's actually used to good effect here where there isn't a hit to be seen and none of these bands should not raise an eyebrow among the general public unfamiliar with such legends/heroes to us anorak's like The Richard Kent Style.  Nearly all of these numbers are previously unreleased tracks from the archives (don't ask from who's, I'm not sure...).

The Summer Set are one of those mega obscure bands that seemed to play a weekly gig in '66 at The Marquee alongside my faves like The Action, The Move, David Bowie and The Buzz  or The Syn (they were, for a time, the club's houseband). Their single track "It's A Dream" (they had two 45's on U.K. Columbia) popped up nearly 20 years ago on one of the Strange Thing's Are Happening "Circus Days" CD and it's a perfect mix of proto psych weirdness and the American West Coast harmony/pop obsession (also one of my fave U.K. 60's obsessions).  I've always wanted to hear more and now I have.  Their "Oh Miss Stone" is a jaunty/cheeky unreleased pop affair that sits nicely alongside The Human Instinct's "Death Of The Seaside" (see May 13, 2010 entry) about a seaside stall merchant. Who said the "West Coast" had to mean California, there was always Blackpool!  The Richard Kent Style are legends on the strength of their firmly mod/freakbeat classic "Go Go Children" and more r&b/soulful (and equally cool) numbers like "All Good Things" .  Someone needs to get around to officially compiling their 5 singles on a nice little CD one day since the singles all run for about a month or two's pay.  Luckily there are bonus cuts to be had like their offering here, an unreleased spirited version of The Contour's "Just A Little Misunderstanding" that breaths new life into an otherwise (in my estimation) played out number. American garage band The Poor's "She's Got The Time" was covered in the U.K. on a 45 by a group called The Affex who amped it up substantially (must've been the speed).  The hitherto unknown Gass Company serve up a second British cover of it, though not as good as The Affex version it's still enjoyable and gets an "A" for obscurity with some interesting lead vocal technique!  The Amboy Dukes (a British band not to be confused with Ted Nugent's lot) are actually a heavy/organ U.K. six piece formed from the ashes of The Platform Six (responsible for the stellar single "Money Will Not Mean A thing" from one of the "Doin' the Mod" CD comps).  Where the Platform Six were firmly in Georgie Fame/Zoot Money Flamingo turf these guys are another kettle of fish, there's still a twinge of jazz but they're quite heavy with the pulsating organ and noodling guitar work on "More And More" and "You Better Find Yourself Someone", think Amen Corner jamming with Arthur Brown on a handful of leapers. The Nocturnes (not the Matawan, NJ, US instro combo) offer a decent hand claps and Hammond groover called "Hay, That's What Horses Eat", a full on party mode record with plenty of "atmosphere" like The Quik's "Bert's Apple Crumble" or Wynder K. Frog's interpretation of "I'm A Man".  The other contribution "Night Owl" (not the Howard Tate number) is more poppy with some nice bass and reminds me of one of those cool B-side or LP cuts by The Tremeloes. The Fleur De Ly's "Nothing To Say" is dead boring lightweight stuff that sounds like a Macauly-McLeod cast off.  "I Walk The Sands", their other track here sounds straight off of "Back From The Grave" with it's lo-fi DYI garage feel and is miles away from the previously mentioned cut!  The Chances Are were responsible for their brilliant soulful cover of the pre-Creedance Clearwater Revival act The Golliwog's "Fragile Child on 45 in the U.K.  Their offering here is a bluesy take on "Talkin' Bout You" with some nice fuzzy guitar and some bass playing that reminds me of The Small Faces Decca instrumentals.  The legendary Brit r&b act Dave Anthony's Moods were responsible for the killer Mike Hugg penned "New Directions" (available on a British 60's r&b CD comp of the same name)  and their legend stands for itself on the strength of that one single. Their inclusion here is a weird little number called "See My Soul" that has a sort of Middle Eastern feel to it, but sadly not very interesting.

All in all I highly recommend this if you're into British 60's r&b/beat or freakbeat, there's some duff tracks here and there but overall it's a decent stroll through the great unknown and unissued of British 60's music.
By Wilthomer - May 20, 2010

Swing by my blog tomorrow if you get the chance I'm posting another Human Instinct tune.