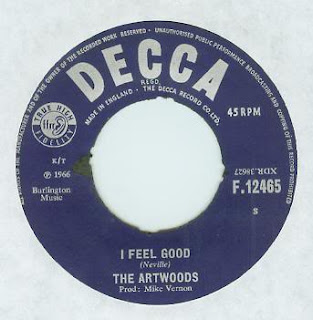 Back in 1985 everyone on the East Coast Mod Scene that was in my little clique (well not "mine" but one i belonged to) owned about half a dozen of them same LP's. Among them were Georgie Fame's "20 Beat Classics", The Action's "The Ultimate Action" on Edsel Records and another Edsel compilation LP "100 Oxford Street" by The Artwoods. I first heard The Arwood's "What Shall I Do" (more on that 45 soon) on a various artists LP called "My Generation" (see December 18, 2009 entry). I liked it and wanted to hear more and took a gamble on their above mentioned Edsel album. The track that blew me away instantly was "I Feel Good". I turned my pals Mod Fun onto it and they began covering it live. By now the number had reached legendary status in our crowd.


Fast forward to 25 years later.  By now I've long been familiar with the original version by Benny Spellman, which I admit I prefer, in fact I rarely listen to The Artwoods these days, but this number still has it's charm in nostalgia for me.  For those not in the know The Artwoods were fronted by Ron Wood's brother Art, with Derek Griffith's (guitar), Malcolm Pool (bass) future Deep Purple man Jon Lord (organ) and Keef Hartley (drums). Signed to the Decca label they released 5 singles, an impossibly rare E.P. and an equally unobtainable for less than a month's pay-check LP ("Art Gallery") before moving to Parlophone for their last 45 as The Artwoods (their final 45 was issued under the pseudonym of The St. Valentine's Day Massacre on Fontana in 1967).  Like many of their mod/r&b peers the band relied heavily on U.S. soul/jazz/blues and r&b covers. 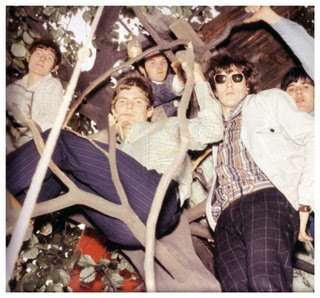 Released in August of 1966 The Artwood's version of "I Feel Good" bears little resemblance to the plodding, steady, horns driven Benny Spellman original.  Instead it relies on a crisp fuzz guitar and a trebly bass that kick the song in at twice the speed of the original.  Art Wood's lead vocals lack the soul of the original of course but Lord's underlying Hammond and the band's subtle backing vocals give it a life of it's own.  On the flip we have the wonderful "Molly Anderson's Cookery Book". On their previous single, a year earlier the did a fuzzed out cover of Sam & Dave's "I Take What I Want " (Decca F 12384).  The flipside was a cheeky jazzy instrumental curiously titled "I'm Looking For A Saxophonist Doubling French Horn Wearing Size 37 Boots".  On our single in question they repeated the zaniness with "Molly..".  Essentially it's a chance for Griffith's and Lord to play Wes Montgomery and Brother Jack McDuff while Wood recites a bizarre recipe ("add 73 Spanish newts....and one sound proof gorilla") in deadpan delivery.

"I Feel Good" has appeared on all The Artwoods CD compilations (there were 3 of them the last time I checked) and "Molly Anderson's Cookery Book" has finally been reissued on Repertoire's "Singles A's & B's" (after being omitted from "100 Oxford Street" and the CD reissue w/ bonus tracks of their sole LP "Art Gallery"). 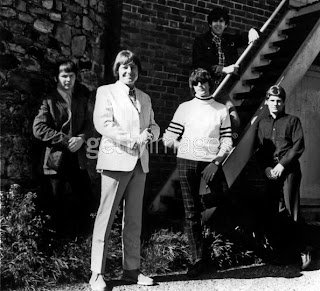 I love the Benny Spellman OG too, but I keep going back to the Artwoods version. It really kicks ass in a way that makes me question - every single time - why they weren't bigger. The same goes for almost everything the Birds did.