We got the hi-fi high and the lights down low..... 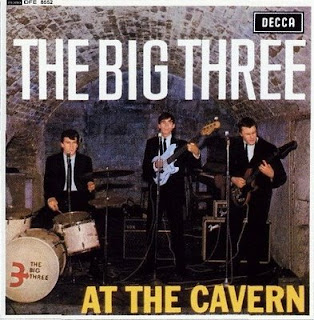 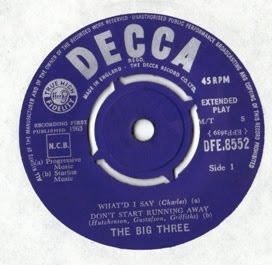 THE BIG THREE- "At The Cavern" E.P. ( What'd I Say/ Don't Start Running Away/Zip A Dee Doo Dah/Reelin' And Rockin') U.K. Decca DFE 8552 1963
With the discovery of The Beatles in 1962 Liverpool was inundated with swarms of A&R men looking for the next best thing. Having passed on The Beatles Decca grabbed a few, The Mojos and arguably Britain's first "power trio" : The Big Three.  Despite just 4 singles and one E.P. (and numerous personnel changes) The Big Three's recording career was short, barely 18 months.  Their line up for this E.P., referred to as their "classic Big Three line up" was: John "Hutch" Hutchinson (drums/vocals), Brian Griffiths (guitar) and John Gustafson (vocals/bass).  Never very stable, the band had numerous personnel changes. In fact by the time of this E.P.'s release in November 1963 the line-up who played on it disitergrated with John Gustafson and Brian Giffiths moving on to form a band called The Seniors with Ian Broad from Rory Storme and The Hurricanes (Gustafson eventually joined The Merseybeats to replace Billy Kinsley a few months later). 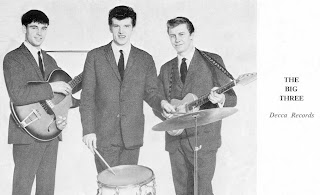 The final product of this line up was our E.P. in question recorded live on a sweaty Thursday night (August 29, 1963 to be exact) by producer Noel Walker in front of a packed audience at Liverpool's legendary Cavern Club.  Opening with Cavern DJ Bob Wooler's wordy hipster intro ("Welcome to the best of cellars. We got the hi fi high and the lights down low so here we go with The Big Three show") the band barrel through an insane amphetamine version of Ray Charles "What'd I Say" full of false stops, audience participation and pure 100% adrenaline. It's almost anti-climactic when the band launch into an original (a rarity for most Liverpool groups) called "Don't Start Running Away", which though lacking the punch of it's predecessor manages alright. The flipside is a half assed version of "Zip A Dee Doo Dah", where the band sounds like a drunken frat rock band.  Things close with Chuck Berry's "Reelin' And Rockin'" which differs little from the original but still has some enthusiasm.
TRIVIA: Decca photographer David Wedgbury failed to capture all three members onstage during the recording of their set so the band were forced to put their sweaty black suits back on and pose onstage afterwards. 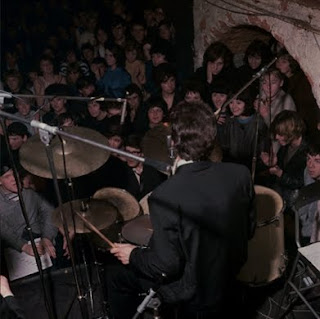 Johnny Hutch onstage at The Cavern during the recording
of the E.P. Pic by David Wedgbury
All four tracks were included on a recent Big Three CD retrospective "At the Cavern" along with some of their other rocking sides.
Hear "What'd I Say" from the "At The Cavern" E.P.:
http://www.youtube.com/watch?v=fRfQ-hm3APs
By Wilthomer - July 28, 2010