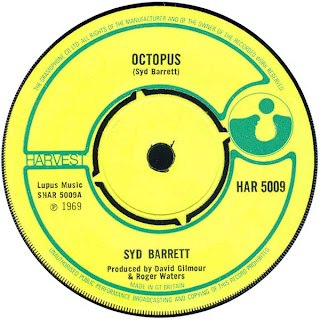 When The Pink Floyd decided not to pick him up any more on the way to a gig in the Spring of 1968 the world had wrongly assumed it had heard the last of Syd Barrett. On November 14, 1969 he was back with a new single produced by ex-bandmates David Gilmour and Roger Waters.  Both the A and B sides were new and would later crop on his debut LP "The Madcap Laughs" (a line in "Octopus") released in January 1970 (U.K. Harvest SHVL 765).

Unless you've been living in a mud hut in Paupa New Guinea or a cave in Afghanistan since 1967 you'll know this so I won't bore you with the stories of Pink Floyd's late founding father Syd Barrett.  You don't need to know how wiggy he was either.  If you do you can read the lyrics to "Octopus":


Isn't it good to be lost in the wood
isn't it bad so quiet there, in the wood
meant even less to me than I thought
with a honey plough of yellow prickly seeds
clover honey pots and mystic shining feed...
well, the madcap laughed at the man on the border
hey ho, huff the Talbot
"Cheat" he cried shouting kangaroo
it's true in their tree they cried
Please leave us here
close our eyes to the octopus ride!


The madcap laughed at the man on the border
hey ho, huff the Talbot
the winds they blew and the leaves did wag
they'll never put me in their bag
the seas will reach and always seep
so high you go, so low you creep
the wind it blows in tropical heat
the drones they throng on mossy seats
the squeaking door will always squeak
two up, two down we'll never meet
so merrily trip forgo my side
Please leave us here
close our eyes to the octopus ride!"

Needless to say you get the drift. But for me there's something entertaining to this track. Sure it's pure gobbledygook, but it's entertaining gobbledygook from it's choppy chaotic chord/key/tempo changes (recording with Syd must've surely been an exercise in patience AND madness) and Syd's rapid fire wordplay delivery. Try and sing it all sometime and not screw it up. Mad genius indeed. The flip, "Golden Hair" is a James Joyce poem put to music. I'm not terribly down with poetry, and certainly not any by James Joyce and even a Syd fan like me can't be converted by him mucking around with some. But you've got to give the boy credit for pulling it off. It's spooky and lovely!

Of course the single went absolutely nowhere and became extremely collectible, copies before Barrett's death in 2006 were changing hands in the vicinity of $100-$200, and have since tripled. 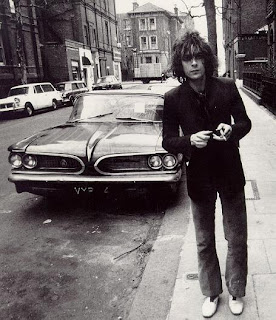 Our hero outside his Earl's Court Square flat 1969.
Pic by Mick Rock, the Pontiac was Syd's.

As mentioned earlier both tracks are available on his debut LP "The Madcap Laughs", which you should hear at least once before you check out. There's also a groovy version of "Octopus" called "Clowns And Jugglers" where Syd is joined by The Soft Machine who back him.  This was lovingly unearthed for the outtakes compilation "Opel". 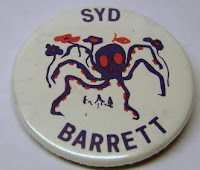 That’s the one badge I’ve been searching for? Do you wish to sell it

If so, email me